By Eugène Ionesco; Translated by Eli Rosen; Directed by Moshe Yassur
Produced by New Yiddish Rep in association with the Castillo Theatre 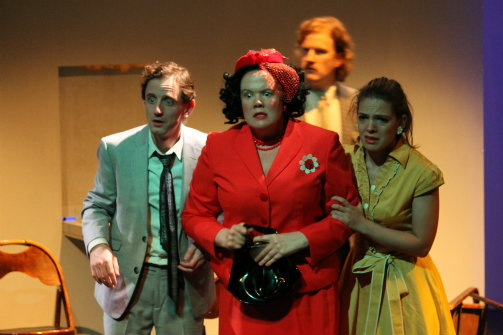 BOTTOM LINE: Ionesco in Yiddish is a brilliant idea, but the execution leaves something to be desired in New Yiddish Rep's latest offering.

Thanks to last season’s award-winning play Indecent, which told the true story of a controversial Jewish play, the Yiddish theatre is having a moment. New York City once teemed with Yiddish-language plays and musicals, but the Holocaust cruelly robbed the world of millions of Yiddish-speaking artists and audience members. New Yiddish Rep, established in 2013, is doing its bit to bring the Yiddish theatre tradition back from near extinction.

Having produced both classic Yiddish texts and modern works (such as Waiting for Godot and Death of a Salesman) in translation during its short life, NYR is now taking on Rhinoceros, a French-language play by Eugène Ionesco, who (while not Jewish) was born in Romania, considered the epicenter of the Yiddish theatre’s golden age. Eli Rosen has translated the text (never before performed in Yiddish) and also plays Jean, a well-dressed Parisian who begins the play by berating his sad-sack friend, Berenger (Luzer Twersky), for being sloppily attired and too often hungover. As they bicker at a sidewalk café, a rhinoceros charges through the streets…a strange sight in Paris, to say the least. People are alarmed and confused: was it really a rhinoceros? If so, did it have one horn or two? And what's to be done about this?

Rhinoceros, written in the immediate aftermath of World War II, is an absurdist examination of the issues that Europe was grappling with at the time, including the psychology of fascism and the price of nonconformity. It’s a perfect fit for the Yiddish theatre, born in shtetls and ghettos, and for today’s Yiddish-speaking actors, most of whom are the descendants of Holocaust victims and survivors. The action is set in 1950’s Paris, as it was originally, but the translation tweaks some of the dialogue to give it a culturally, if not religiously, Jewish spin—for example, changing the day of the first scene from Sunday to Saturday (or Shabbos) and throwing in a reference to the synagogue. Supertitles are projected onto the set to allow us to follow the action. (I’m assuming there were no supertitles back in the 1890s.)

The rhythms of the Yiddish language are perfect for this piece, and Luzer Twersky, playing “everyman” Berenger, who emerges as the central character, immediately commands our sympathy. Looking like a hybrid of Woody Allen and Sean Penn, Twersky (who you may have seen in the show Transparent) works furiously to carry the weight of this talky, cerebral comedy on his slight shoulders. It’s too bad that the direction, provided by Moshe Yassur, is so insufficient. The actors (some of whom are more professional than others) are all exceedingly game, but their blocking frequently feels awkward or aimless, and one wishes they had occasionally been advised that a whisper would work as well as, or better than, a shout.

Even a just-okay staging of Rhinoceros is entertaining, but given the significance of NYR’s production, it’s disappointing that the text and the cast aren’t better served. Hopefully this company is still finding its groove; let’s cross our fingers that first-rate Yiddish versions of The Bald Soprano, No Exit, and The Maids are just around the corner.

(Rhinoceros plays at the Castillo Theatre, 543 West 42nd Street, through October 8, 2017. The running time is two hours with an intermission. Performances are Wednesdays through Fridays at 7:30; Saturdays at 2 and 7:30; and Sundays at 2. There are no performances during Rosh Hashanah and Yom Kippur. Tickets are $45 and are available at newyiddishrep.org.)