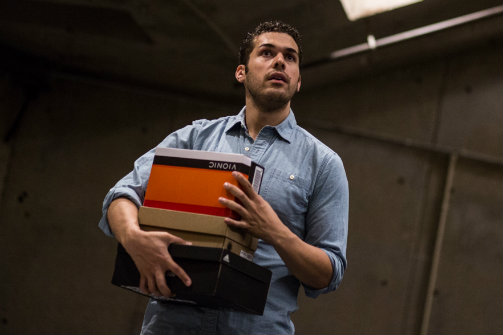 BOTTOM LINE: A bold, emotionally explosive peak into the impact of post-traumatic stress disorder on one returning Iraq War veteran.

Argentinian philosopher Jose Narosky once write that "in war there are no unwounded soldiers." This statement could easily serve as epigraph for Christina Masciotti's searing new play Raw Bacon From Poland.

The drama zeroes in on Dennis (Joel Perez), a recently returned Iraq war veteran with simple plans: get a stable job; buy a house in a safe neighborhood; and influence (and maybe spoil) his daughter as she comes of age. But life can throw whammies and in Dennis' case, they're whoppers. First, he's stuck in a dead-end job selling overpriced shoes to wealthy customers, where he is paid minimum wage plus commission; needless to say he's not exactly fulfilled by the post. Second is his addiction to heroin, perhaps his way of coping with the PTSD that's left him sleepless, irritable, and quick to anger. On top of this, a recent arrest for domestic violence—he's been charged with attempted strangulation of his wife—has sent him to Brooklyn Treatment Court where he is subjected to mandatory drug testing and counseling.

To say that Dennis is miserable is to state the obvious, but Perez gives such a masterful performance that his misery is both nuanced and palpably real. Indeed, Perez's ability to move between calm and explosive, coupled with his skill in wordlessly conveying deeply felt emotion, is remarkable and makes him a performer of tremendous power. What's more, as the audience peers into the therapy sessions that Dennis is required to attend, the work he does with Counselor Ken (Jay Smith) mimics authentic sessions and utilizes authentic techniques. Throughout, flashbacks come at a rapid clip (soldiers are played by Kate Benson, Paul Boocock, and Douglas Scott Streater, actors who take on multiple roles ranging from Treatment Court personnel to shoe buyers) and provide an insightful window into the incidents that continue to haunt Dennis and prevent him from plugging back in to civilian life.

It's an intense, fast-moving set-up and Ben Williams' direction, Jacob A. Climer's scenic and costume design, and Oceana James' stage management are perfectly calibrated for maximum impact. And while the story of a returning vet with PTSD has been told before, Raw Bacon From Poland—the title refers to Dennis' American Dream of one day being able to consume luxury products—focuses on the ways trauma intersects with Dennis' experience of racial and class bias. The limitations—an interesting mix of self-imposed and societal roadblocks—come to the fore as Dennis attempts to silence his demons and function as a parent, worker, and family man.

Masciotti's subtle script avoids politicized language. At the same time, her critique—and her understanding of internalized oppression—are readily apparent. My only criticism is that the play never explains what motivated Dennis to enlist. Was it patriotism, a desire to escape his life, delusions about freedom and honor, or a fleeting impulse? Knowing this would ground Dennis' volatile character and make him more sympathetic. Still, this production packs a lasting punch and forces the audience to grapple with the wounded warriors living in our midst. Masciotti further suggests that it does not have to be this way. As John Lennon and Yoko Ono declared in 1969, war can be over if we want it to end. There just has to be the will to find a way.

(Raw Bacon From Poland plays at Abrons Arts Center, 466 Grand Street, through June 17, 2017. Running time is 90 minutes with no intermission. Performances are Wednesdays through Saturdays at 8. Tickets are $25 and are available at abronsartscenter.org.)