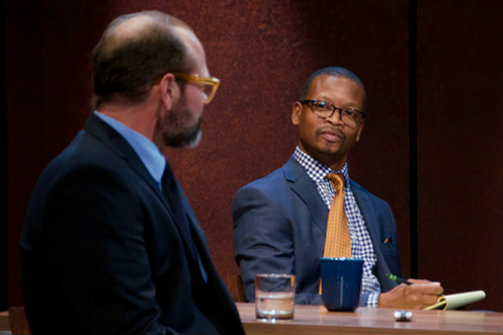 Chris Bauer and Lawrence Gilliard Jr. in The Penitent. Photo by Doug Hamilton.

BOTTOM LINE: David Mamet’s latest play is most interesting as a case study in fallacy, fragility, and the confluence of choices that lead to irrevocable turmoil.

"Homosexuality considered as an adaptation": words that Charles (Chris Bauer) wrote many years ago as a young psychiatrist. Those words come back to haunt him when a boy under his care murders ten people and claims Charles refused to treat him because he was gay. A newspaper finds and prints Charles’s line on homosexuality, accidentally (?) replacing the word "adaptation" with "aberration," altering Charles’ argument and leading to a misinterpretation of his treatment plan—or lack thereof—for the mentally unstable boy. Despite his desperation to correct the record and to sue the paper on charges of libel, Charles cannot erase what has already been read and digested by millions of people. Adaptation, not aberration, Charles continues to insist, but his declaration simply degenerates down a vortex of deaf ears; the words were printed, motivations have been questioned, and unalterable opinions have been made.

Charles seeks council from his lawyer Richard (Jordan Lage), who feels Charles can mitigate the newspaper’s misprint by testifying on behalf of the boy, a suggestion to which Charles is hesitant to agree. Meanwhile, Charles’ wife Kath (Rebecca Pidgeon) is alarmed by the events which have catapulted their marriage into  tumult and utterly confused as to why Charles won’t simply do whatever is necessary to end this blight. Charles seems to be caught in an ethical quandary: should he testify on behalf of his patient to help disavow rumors of his homophobia, knowing that such an action inevitably means breaking the Hippocratic Oath? Either way, Charles’ morality is jeopardized: refusing to testify for the boy fuels the homophobic fire, but taking the stand would risk exposing the inherently confidential exchange between doctor and patient.

In typical Mamet fashion, all of this unfolds quickly and sporadically, and both Bauer and Lage do a nice job of punching the language and finding its musicality. The same is true of Lawrence Gilliard Jr., who appears in a later scene as the boy’s defense attorney. Pidgeon, on the other hand, recites the words in a bizarrely stylized manner, belaboring the language and consistently anticipating when Bauer is about to cut her off. Consequently, her lines feel void and flaccid, sucking the momentum out of her scenes. Then again, poor Kath is the most one-note of the four characters, with so many "I don’t knows" and "I don’t understands" that we start to wonder what her purpose is, if not simply to serve as an empty vessel for her male counterpart to fill.

Tim Mackabee’s set design is appropriately barren, with two long cherrywood trapezoidal flats lining upstage and stage right, positioned and shaped as if to distort dimensionality. A table, two chairs, and small set pieces transition us swiftly from Charles and Kath’s house to Richard’s office to a questioning room. In providing a non-naturalistic, simplistic, somewhat surreal backdrop, director Neil Pepe amplifies the vacant and phantasmagorical undertones implicit in this exploration of trauma and psychosis.

With such a simple backdrop, the details of the design pop. Laura Bauer’s costumes are lovely, with care given to such accessories as Charles’s tan thick-rimmed glasses and the attorney’s rusty orange and black checked socks. Donald Holder's lighting is soft, setting scenes with subtlety, as in Richard’s office when the flats glow with slatted, off-kilter blinds, or when the boy’s defense attorney questions Charles against a backdrop of interrogation-style orbs of light. Rather than overtly declaring themselves, these features float silently in the background, subliminally orienting us in time and space.

The strength of this Mamet piece is in its ideas: wrapped up in the archetype of the penitent are faith, regret, sin and forgiveness, each of which Charles grapples with. There is also, of course, the intrinsic leap to the penitentiary and the prison of thoughts, language, institutions, and occupations that render an individual immobile. But ultimately, Mamet uncovers the gut-wrenching phenomenon that perhaps no penance can alleviate—how one word, one moment, one passing choice can alter the course of many lives.

(The Penitent plays at the Atlantic Theater Company's Linda Gross Theater, 336 West 20th Street, through March 26, 2017. The running time is 90 minutes with an intermission. Performances are Tuesdays at 7; Wednesdays at 8 (with added show at 2 on 3/15 and 3/22); Thursdays and Fridays at 8; Saturdays at 2 and 8; and Sundays at 2. Tickets are $65 and are available at atlantictheater.org.)

The Penitent is by David Mamet. Directed by Neil Pepe. Set Design is by Tim Mackabee. Costume Design is by Laura Bauer. Lighting Design is by Donald Holder. Stage Manager is Mary Kathryn Flynt.