This show is closed. For more information visit thearcticgroup.org.

Off Off Broadway, Play
Ran Through 9.24.17
IRT Theater, 154 Christopher Street 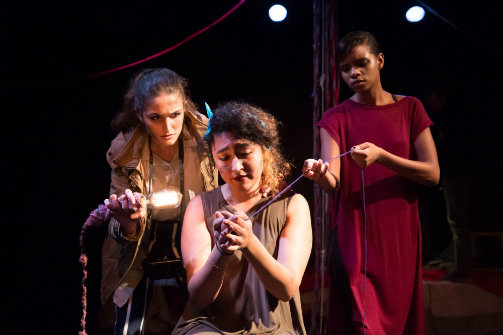 In times of upheaval, what is the role of memory? As global crises dominate headlines and news feeds, and fresh tragedies eclipse their predecessors, the act of recording and processing what we see may seem irrelevant, if not futile. Yet the very conditions that complicate memory-keeping also give it sanctity, the act demanding godlike patience, strength, and sacrifice from those who undertake it. Setting the classical myth of Hades and Persephone amidst the current refugee crisis, Ran Xia’s Pomegrenade speaks to this power, revealing the importance of storytelling and the inherent nobility of bearing witness.

From the play’s inception, Pomegrenade’s set roots its action in these concepts. A cluster of old mattresses and couches, the show’s Underworld recalls the thrown-together arrangements of field hospitals or refugee camps. An intricate net of yarn, reminiscent of a spiderweb or brain neuron, dangles in centerpiece, its strands crossing rafters to frame both audience and performers. This structure, we learn, is the “Memory Archive,” which holds the stories of every departed soul. As ruler of the Underworld, Hades (Finn Kilgore) maintains this archive, extracting and preserving the dead’s tales with help from cynical ferryman Kharon (Jes Davis) and reporter-esque messenger god Hermes (Maricelis Galanes). Now, Earth’s brutal wars have stretched the Underworld to capacity, and the gods scramble to house the casualties and process their accounts.

With tent cities lining the River Styx and excess memories flooding his own mind, Hades abducts the Spring goddess Persephone (Lizzy Ana Lincoln), desperate for her companionship and life-giving powers. Persephone, however, refuses to cooperate, her thrill at their secret affair turning to rage once Hades’ true motives emerge. Trapped in subterranean limbo, Persephone aches to fight the chaos above, desiring the hand grenades of battle over Hades’ quietly regenerative pomegranates. Meanwhile, cocky war god Ares (Sean Hinckle) feeds off both worlds’ strife, reveling in human carnage and stirring divine dissent for his own pleasure. As Earth’s crises worsen and Ares’ machinations cause further upheaval, the Underworld’s residents must confront these changes to restore balance in their realm.

Pomegrenade’s thoughtful script gives new life to its ancient source material, its characters equally mythic and relatable. Brimming with idealism but limited in scope, Lincoln’s Persephone embodies our concern and frustration as privileged bystanders, and we share in her journey from passivity to empowerment. Brooding, awkward, and misunderstood, Kilgore’s Hades elicits empathy even as his choices worsen a bad situation. Ushering in the second act as bartender and emcee, Diane Chen’s Dionysus holds more depth then her drunken antics imply, her flamboyance a survival tactic in a society more drawn to hedonism than transcendence. Even Ares shows complexity beneath his frat-boy exterior, owning the addictive urges that drive him to destroy others’ lives.

Inspired by the accounts of war correspondents, and writer-director Ran Xia’s work with Doctors Without Borders, the play’s journalistic sub-focus heightens its impact. Its all-female chorus (Jara Skagfjord, Andrea Negrete, Zoe Abuyuan, and Sarah Gwynne Walker) captures every heartbreaking and inspiring voice of human conflict, portraying traumatized refugees, overtaxed aid workers, harried mothers, and fierce resistance fighters. The parallels between epic figures and these modern heroes are evident: like the play’s gods, each group buckles under the responsibilities placed upon them, but persists out of duty and love. 4:48 (Marie Zoumanigui), a soul charged with storing the Underworld’s excess trauma, serves a similar function, rising from suicidal soldier to messianic figure in her adoption of humanity’s pain. By framing personal accounts as windows to humanity, the characters’ attempts to witness and voice these tales moves from reflexive observation to active protection of the things they value.

Like the fruit and weapon from which its name derives, Pomegrenade is a testament to mankind’s creative and destructive power. Its accounts depict life’s darker sides with journalistic frankness, laying bare the deliberate cruelty or merciless neutrality of human, divine, and natural forces. Yet, just as grenades can defend or bitter fruit can nourish, its characters’ perseverance speaks to our ability to not only endure trauma but forge life from its ashes. In the absence of apparent order, the play calls on us to craft new narratives, rewriting ourselves as the gods and heroes in which we set our faith. Pomegrenade’s message is ultimately one of hope: handled with reverence and action, our stories can change the worlds we inhabit, transforming tombs into gardens and gods from relics to stewards of a new age.

(Pomegrenade played at IRT Theater, 154 Christopher Street, #3B, through September 24, 2017. The run time was 2 hours 20 minutes with an intermission. Tickets were $18. For more information visit thearcticgroup.org.)