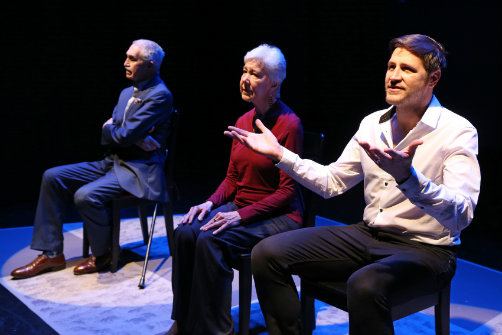 BOTTOM LINE: A riveting collection of plays and monologues that explore what it means to be seen as an "other."

Opening the 38th season of Theater Breaking Through Barriers is The Other Plays, a series of plays, monologues, and song revolving around themes of "otherness." The company is known for its ability to shed a truthful light on the lives of those living with disabilities. They do it with humor, excellent casting, and plays that pack a serious punch, and with a humanity only present in great theater.

The Other Plays is comprised of nine pieces that run the gamut. The evening is well curated, though a few plays stick out because of their clunkiness and underdeveloped scripts. One in particular was a little bit of a train-wreck, which I’ll attribute to nerves. But such problems are easily forgotten as soon as the next piece begins.

The highlight of the evening is A Difference In Beauty, by Tatiana G. Rivera. Director Pamela Sabaugh has her three riveting actors seated and they address us. The piece is a reminder that, just like the three characters, I can still be completely surprised by something so simple. Indeed, Rivera’s text is both touching and stirring. Who knew you could write a play revolving around themes as cliched as "inner beauty" and "it’s the journey not the destination," but do it in such a way that you’ll forget those are lessons you still need to be reminded of? The three characters are grappling with a “situation,” for which they have been complimented by people in their lives. All three react differently to being called "stunning," "beautiful," and "sexy," respectively. This is a pointed and unpredictable text from a promising emerging playwright.

Going to see The Other Plays will further your understanding of a community that's so under-represented, you may even learn something new. I, for instance, learned about oralism. "Forcing me to always accommodate to your methods of communication is hearing privilege, oralism, and ableism," says Stephen Drabicki in his piece Table for Two. His character finally confronts the guy he was sort of seeing about how he’s felt in the relationship—uncomfortable and isolated. However, in a clever and empowering table-turning speech, he makes his audience realize that maybe he’s not hearing impaired, but we’re simply signing-impaired. This is the kind of energizing and thought-provoking moments you can expect to have in nearly every piece that makes up The Other Plays.

Later, Russell Barnes’ monologue I Never Walked Alone—performed with effervescence and disarming charm —will also make you smile and think. The title of the piece refers to what he feels are "like the blind and their service dogs. A part of me": his walker Connie Walker and his crutches Herbert and Louise. Together, the team get into all sorts of trouble with legends of the stage and screen.

Bekah Brunstetter’s Girl #2 is a poignant piece that confronts what I assume is an already fairly "woke" audience with new questions. Disability knows no race, no gender, no class. In her play, Brunstetter toys with this concept in a beautifully crafted four-way conflict. Four actresses, each of a different race, are waiting to audition for the elusive part of Girl #2. I was particularly struck by an interaction between Latina Girl (played by the hilarious Sofiya Cheyenne) and White Girl (played in earnest by Kiera Allen) in which the "diverse" girl reaches her breaking point with the well-meaning whitesplainer: "this is not the moment when I make you feel better about yourself."

Overall, this evening of theater is a moment to reevaluate and retire tropes of people living with disabilities as anything but independent and full of verve. These folks are as flawed as any human and as entitled to their choices and lifestyles. Theater Breaking Through Barriers has lived up to its name once again.

(The Other Plays played at the A.R.T./New York Theatres, 502 West 53rd Street, through March 26, 2017. The running time is 80 minutes with no intermission. Performances were Wednesday and Thursday at 7, Friday and Saturday at 8, and Saturday and Sunday at 3. Tickets were $25 and were available at TBTB.org.)