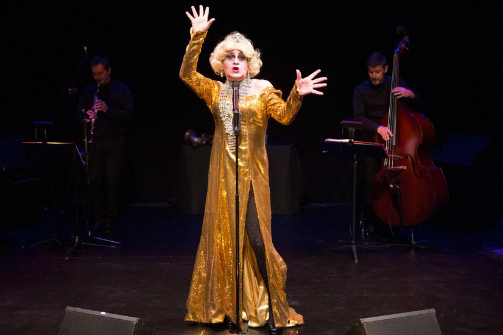 BOTTOM LINE: Actor/writer/director Olivier Py performs a cabaret sung all in French as his alter ego "Miss Knife" in this stunning and beautiful piece.

Olivier Py Sings Les Premiers Adieux de Miss Knife inspired in me a joy so few shows are able to elicit. I was impressed by the music, dazzled by the costumes, and completely floored by Olivier Py's talent as seen on the stage of the Fishman Space at the Brooklyn Academy of Music (BAM). His voice strong and purposeful, beautiful yet textured, he performs over eighty-five minutes of pure magic. Py wrote the text while Stéphane Leach and Jean-Yves Rivaud wrote the riveting music. Ballads lead to belting and the result is breathtaking.

Olivier Py is a well-respected French writer, director, and actor. His first play was produced in the late eighties, and over the past three decades, he has gained the respect of the theatre world, most recently directing the Festival d’Avignon. Seeing such an established member of the theatre community is always a pleasure, but in this case he exceeded expectations. Py's voice is inspiring and mesmerizing. His singing could be a performance all on its own. Not only that, but the music, played by Julien Jolly (drums), Olivier Bernard (sax, flute), Stéphane Leach (piano), and Sébastien Marie (double bass) could also stand alone and thrill audiences. If Py so desired, he could use his humorous interludes for a set at the Comedy Cellar. And last but not least, Olivier Py has such a thrilling commitment to his character, that seeing him act alone would be sufficient for a production.  When we combine each of these aspects, it is overwhelming in the best possible way.

It is important to note that all of the songs are sung in French (minus one, which was the solo from a guest artist). But words are not the only way to communicate; I don't feel like I missed much by not understanding the French language. Py utilizes non-verbal elements such as facial expressions, movement of limbs, and body tension, as well as many others. From where he shifts his gaze, to raising an eyebrow or biting his lip, every inch of his body tells the story. Then when we analyze the actual sounds emitted from his mouth, it is even more apparent that speaking French is not necessary. With specific enunciation, volume, vibrato and many other techniques Py is able to communicate the mood and feeling of the numbers, even if we don't know the meaning of the words.

Py tells us in the program that “it was inevitable that I would invent and embody this character of the cabaret singer. I had it in the depths of myself. I did not play Miss Knife; she was a member of me. She was in me.” Costume designer Pierre-André Weitz helps bring this incarnation of Miss Knife to life with sequins, a gold gown, a leotard with feathers, and an oversize bright red fur coat. There is a necklace of pure “bling” from neck to belly button as well as black pumps and glittering leggings. Even with Weitz's stunning costumes, Py does not let the clothes wear him, but maintains his confidence and poise.

“She” is committed to the performance and hilarious, even dedicating one song to straight people, “who there are less and less of.” Py is enchanting and this captivating show is truly special. Even each individual performance is even one of a kind, with different guest artists appearing nightly. I was delighted to hear Jo Lampert and Olivier Py build a spectacular mountain of sound with their powerful voices and then drop to a sweetly sung note in almost a whisper. Even with four musicians playing their hearts out as loud as they can, Py owns the space. Yes, he is inclusive of the band, interacting with them as scene partners, but being so incredibly expressive, he commands our attention, displaying what an accomplished performer he is.