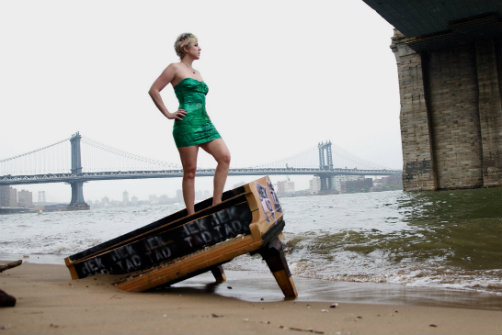 A “Box of Things,” the Wheel of Destiny, “Relationship Corner,” a stand-up microphone, and a blonde woman at the center of it all. Wearing a red onesie adorned with a wintry scene of penguins and snowmen, she tinkers with her set and then slinks offstage. The lights dim and a screen on the upstage center wall shines with a sepia-toned video. The camera focuses in on a baby jabbing her fingers into a birthday cake. It pans to a jovial woman—a likeness so strikingly similar to the woman we’ve just seen on stage—who watches with maternal pride as her baby consumes or, more precisely, explores, the chocolate cake. As the video plays, we hear a midwestern-accented voice from backstage: the blonde woman again, relaying that she is not ready to take the stage because she needs to pee. And with that, we are submerged into the universe of Kelly Dwyer, a Toledo-native with a Jameson Whiskey tattoo, a love of baths, and a wicked knack for comedy.

Not Show Business is Dwyer’s one-woman show, but to call it a solo show doesn’t seem quite right: Kelly’s equally charming husband Craig makes cameo appearances throughout, and the audience also features prominently. Indeed, this hour-long set is given structure through the audience: volunteers are prompted to spin the Wheel of Destiny, and wherever it lands catapults Dwyer into a song, a video, relationship advice, or into her “Box of Things,” all of which serve as vehicles into Dwyer’s amusing narratives. Dwyer also employs technology to heighten the sonic life of her tales: at her disposal is a tricked out tech center that includes reverb effects, a loop pedal, and a futuristic looking digital guitar—all of which she navigates with familiarity and ease.

Dwyer proves herself a keen observer of the human condition, finding the humor in somber moments of her life—moments she seeks to remember, work through, and relay with a comedic valence—while continuing to punch their poignancy. In the performance I saw, she regaled us with stories about medication, mental-illness, racism, and her “blood bath” (so to speak) of an eighteenth birthday party. Dwyer invokes these scenes through inventive soundscapes, carefully honed physical embodiment, and sharply chosen language.

Clearly a seasoned performer, Dwyer shines as an artist who pays homage to the comedic art: it's not always about being funny (although she's pretty freaking hilarious), but about honesty and vulnerability. She has the unique ability to find her past amusing, while simultaneously conveying the gravity of these moments. As Dwyer tells a story of an inadvertently racist Halloween costume, one cannot help but laugh at the outrageousness and inappropriateness of the incident, yet by the end, her eyes are red with tears as she reflects on those who were wounded by her actions. It is a rare skill to move with such honesty from the laughable to the solemn.

Dwyer approaches Not Show Business with a reveal-all sort of mentality. And while the show is about her, it is also about the universality of the embarrassing, sometimes cringe-worthy, “oh shit” moments that make us who we are. I admire her ability to look back on these events not with shame, but as an opportunity for growth and genuine connection. Though this show is guaranteed to change from night to night, a ticket to Not Show Business will assuredly grant you admission to an entertaining evening in the capable hands of the endearing, witty, and intelligent Kelly Dwyer.

Not Show Business is written and performed by Kelly Dwyer.