By Charles Way; Directed by Paul Bosco McEneaney
Produced by Cahoots NI in association with the Lyric Theatre, Belfast 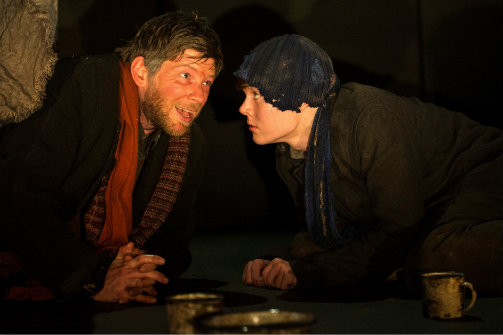 BOTTOM LINE: A lost boy, a mystery man, their odyssey home during one of humanity's darkest hours, and magic that saves lives.

It's Frankfurt, decades after the second World War. An old theatre welcomes "The Great Nivelli" (Dan Gordon) for a highly anticipated show. Yet the returning hero in a top hat has stories in his eyes as he glances at the brightly colored poster on the empty stage, preferring the stage manager (Faolan Morgan) to call him Ernst instead of his grandiose title. Lost in contemplation, the aged magician blows up a red balloon, and with a puff of smoke, the back of the stage opens to reveal the past.

Ernst's earlier years are displayed like a slide show. It was a storybook beginning as we see the infant in his mother's arms; his father stands next to them, in a soldier's uniform, and soon disappears into the unforgiving history. Finally we stop the spinning wheels of time and take a closer look at the boy Ernst (Jack Archer): it's the tail end of WWII, and the mother (Emma Deegan) and son are barely getting by, while incessant bombings turn them into frequent visitors at the shelter. The mother eventually decides to send her son to the country, where we meet Tante Sophie (Maggie Cronin), who takes Ernst in, but is dealing with her own tragedies as well (mourning her departed husband and living in fear of the foxes that steal her vegetables). Eventually she abandons the boy to fend himself against an unknown fate.

And that's when Ernst meets a mysterious Mister H (Bob Kelly). After the initial hostility, Ernst warms up to H and begs the older man to take him home, and soon the unlikely pair goes on a journey—destination: Frankfurt. The reluctant guardian and the excitable child bond over the course of their treacherous journey. The stage is transformed into various terrains as they cross the ruins by day and rest in the woods by night, with a series of black and white photographs of WWII-era Germany projected onto the background, giving eerie historical context. And when they're threatened by a pair of Russian soldiers, Mister H uses a few magic tricks to calm the situation, leaving the soldiers entertained and the boy completely enthralled. Although they are unable to communicate verbally, their shared joy in magic becomes a universal language.

Nivelli's War has all the ingredients of a classic in the making. Playwright Charles Way doesn't veer away from the traditional plot of a child looking for the way home, yet the delightfully familiar story doesn't feel formulaic at all, with the impressively dynamic duo pulling your heartstrings throughout. Kelly's Mister H reminds one of Hugh Jackman's Jean Valjean with his rough exterior and benevolent nature. When Ernst arrives home, H finally tells the boy his real name, Levin, which he reverses into the stage name Nivelli. Within the context of a post-WWII Germany, the bond between the Jewish man and the German child is even more heartwarming.

Director McEneaney makes full use of the depth of the stage at the New Victory to create layers for his multidimensional tale. Sinead McKenna's lighting and Garth McConaghie's music also add much to the mesmerizing world of memory and magic. And speaking of magic, Paul "Mr. G" Gomac is the wizard behind many of the enchanting illusions on stage, which delight the many children in the audience and amaze the adults as well.

Although advertised as children's theatre, with a plot line that recalls the British novel/play/film War Horse, Nivelli's War is a story for adults as well. Cahoot NI's moving tale of friendship is inspired by the real life story of Herbert Levin (a Jewish magician who changed his name to the more exotic sounding Nivelli and whose skills saved his life in a concentration camp), and Werner Reich (a boy who was influenced by Levin to have a lifelong interest in magic). When the magician pulls a flower out of thin air, and you see the fascination on the faces of children and adults alike, you'll realize, that the true magic is not in the performer's slight of hand or a secret pocket full of poker cards, but in the fact that joy has the power to diminish hate.