Matthew McConaughey vs. the Devil: An American Myth

Book by Emilie Landmann; Music by Jonathan Quesenberry; Lyrics by Carrie Morgan
Directed by Thomas Caruso
Presented by the New York Musical Festival and Everything Rhymes With Blorange LLC 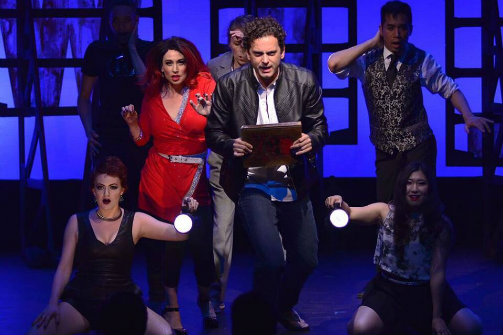 BOTTOM LINE: If you have ever wondered how Matthew McConaughey went from making lame rom-coms to becoming an Oscar winner, this very fun musical offers some possible, diabolical answers.

Picture it: Hollywood, circa five years ago, just after the release of Magic Mike. McConaughey (Wayne Wilcox) appears, singing “Alright, Alright, Alright” (also the title of a catchy, up-tempo number—my favorite) and venting to his childhood best friend and long-time agent, publicist and dog walker, Penny (Jennifer Blood) about his lack of opportunities as a dramatic actor. He’s also jealous of his chief rival, Leonardo DiCaprio (Riza Takahashi), who is followed by a chorus that croons his name adoringly. Leo is taken far more seriously by directors such as Martin Scorsese, with whom McConaughey is desperate to work. MM laments being cast in the same role over and over as “the charming guy with the nine-inch dick.” He’s eager for a golden statue and he and Penny, who has only the one client, duet on the ballad “I Could Win an Oscar.” He tells her about his recent run-in with Leo, who called him a “fucking joke,” and explains that the encounter got him so stressed out he couldn’t even play his bongos. Penny, who is looking for more respect in the industry and to take on more clients, is also at a crossroads.

MM does have a terrible idea for a passion project that his buddy Woody Harrelson (Max Crumm), a struggling actor in this universe, would love to be cast in: something to do with a Nazi who learns to love from some blind orphans. They harmonize and dance out the story of their bromance in “Everything I’d Never Do.” Mephistopheles (Leslie Margherita) , dressed in red, of course, suddenly drops in. She has a script for Matthew. Part of the nether world’s attempts to “rebrand to a more positive image,” it’s the script for Dallas Buyer’s Club, which she sells as “homophobic cowboy gets AIDS.” Mephistopheles attempts to seduce MM into signing away his soul with the song “Lincoln Guy” and shows him a future in which, if he doesn’t, he’ll be back in Texas getting drunk and “driving a Taurus.” He signs and the company, dressed like a gospel choir in red robes, sings about the “McConaissance.” Of course with the Devil in the mix there are more deals, betrayals, and a brilliant, captivating weed ballet before McConaughey, who becomes more dickish and less charming in the process, comes back down to Earth.

Wilcox, an established theatre actor probably best known for his role on Gilmore Girls, is very winning, bringing a laconic, stoner goofiness to the (presumably) exaggerated portrayal of the conceited, obnoxious McConaughey. Blood, cast in the least flashy part, has a lovely soprano and brings sweetness to the role. Crumm, also a great singer, gets well-deserved laughs for both his puppyish devotion/obsession with his best friend and when he thinks he’s romancing Mephistopheles. Margherita, an outstanding performer and NYMF Best Actress last year, steals the show, whether she’s sharing her motivations with Penny (power gets her hard), pretending to come onto Woody or hammily getting drunk on many glasses of wine.

Writer Emilie Landmann, composer Jonathan Quesenberry and lyricist Carrie Morgan have crafted a funny, inspired, highly memorable show. Director Thomas Caruso has a deft hand, staging nearly twenty songs without it feeling rushed and skillfully utilizing a cast of ten, including the terrific ensemble. The musical numbers breeze along, but a couple of cuts could be made in the latter half without damaging the character arcs. Special mention goes to Daryl Stone, who couldn’t have had a large costume budget but did wonderful work, in particular during the weed ballet. This production, like all NYMF shows, was put together in seven months, which is all the more impressive knowing that in a staged reading earlier this year, none of the principals were involved.

(Matthew McConaughey vs. The Devil: An American Myth played at the Acorn Theatre, 410 West 42nd Street, through July 16, 2017. The running time was 95 minutes with no intermission. Visit nymf.org for more information.)