By W. David Hancock in collaboration with Wardell Milan;
Directed by Taibi Magar
Produced by The Foundry Theatre 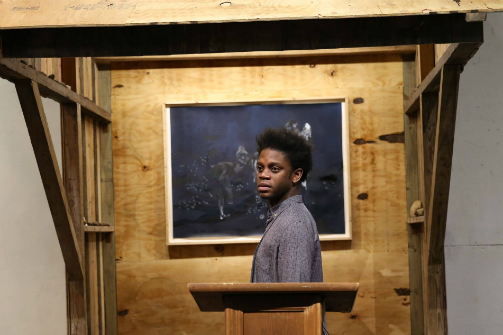 BOTTOM LINE: In memory and celebration of "Uncle Jimmy," the black artist whose body of work transcends the boundary of time and questions the aesthetics of justice.

The gallery is a sacred place. It’s an extension of the artist’s life: a portal to a past so personal that it has the power to bind together anyone who’s willing to be moved. In Master, everything within the space (immersive installations created by visual artist Wardell Milan) is a relic from the charmed life of James Leroy “Uncle Jimmy” Clemens, preserved down to the microscopic details, living and breathing in every stroke of his paintings, every yellowing page of his book collection, and every rip and tear of time, visible along the edges of his memories. Edna Finn (Anne O’Sullivan) greets you at the entrance and tells you to check out this and that; she roams about the room full of objects and artworks created by her late husband, and speaks to you in a soft, kind voice.

The gallery is Uncle Jimmy in every medium. There are distorted self-portraits, a Nintendo game version of Jimmy’s journey down the Mississippi, audio books of Tom Sawyer’s adventure stories, an Indian tent, and collages on the wall. And there’s the shed, recreated based on Jimmy’s experience on the island with Huck (yes, Uncle Jimmy is that Jim, from The Adventures of Huckleberry Finn). Step inside and you’ll be transported to a different reality: a dark arena of introspection lit only by a hole in the ceiling, dropping a strobe of dusty beam onto a fossilized campfire; you sit down, and all you can hear is the labored breathes of a man in fear. And when you’re finally ready to return to reality, you’ll have a newfound connection with Uncle Jimmy, and you’ll be ready to mourn the loss of, no, celebrate the life of “Uncle Jimmy,” the father, the husband, the black artist with a distinct voice that is sure to linger long after this gallery reception, long after you’ve left the space that’s him, through and through.

Edna tells you to grab a seat, before taking the podium to give her address. And so we meet Uncle Jimmy through Edna’s joy and grief. She tells you about Jimmy’s life, their marriage and hardship, and their love. We learn that Jimmy spent his lifetime “illuminating” the works of Mark Twain, shedding light not only on the characters we know, but also the hidden aspects of the iconic American novel. We learn that Jimmy wouldn’t sell his works to while collectors, and we learn about the estranged relationship between Uncle Jimmy and his son James (Mikeah Jennings), who sold his father’s painting in order to buy a car, and ultimately ran away from home. We hear from James too, who, in his own way, shares his grief and his indescribable love.

David Hancock extends the world of Huck Finn beautifully and holds up a mirror against reality in this genre-defying play. The line between reality and fiction disappears as director Taibi Magar transforms the piece into an immersive experience. The presence of the artist, the man who held on to his belief no matter what, is palpable. By the end of Edna and James’ speeches, you’d think that you’ve known Jimmy all your life. The actors’ nuanced performances also make it easy to fall in love and sigh for the loss of a man who never lived. O’Sullivan’s Edna is reserved and delightful, with the quiet strength of a stream that could polish off the toughest of stone. Jennings’ James offers the perspective of Uncle Jimmy’s youth, as well as embodying a new generation with residuals of their fathers’ rage, and somewhat of a newfound hope.

There is power in the simplicity and sincerity of Master. The effortless recognition and the complexity of the characters cannot be achieved without the elaborate production design (the effective set by Marsha Ginsberg, projections by John Narun, and Gian Marco Lo Forte's props). You hear the poetry of words and learn about Uncle Jimmy, as well as what he represents, from Edna and James, but you also experience all that in the silent communication that’s unique to a gallery. I found myself scouring the Internet for traces of Uncle Jimmy and his family after the show, not willing to believe, after the hyper-realistic reception, that he is not a part of the reality as we know it.

Yet what makes a narrative “real” anyway? Twain’s literature, Hancock’s spin-off, and Milan’s visual augmentation, sprung out of the same part of history that contains a debt that the world has yet to repay Uncle Jimmy, who isn’t one man, but the amalgamation of every black man and woman who was, and still is, a victim of slavery and racism. Uncle Jimmy’s life story is the missing component of the American narrative immortalized in Twain’s novel, and his art, as his widow described, is like a journey along the river with eddies and undertows.

(Master plays at Irondale Theatre Center, 85 South Oxford Street, through June 24, 2017. The running time is 1 hour 15 minutes, including time to explore the gallery. Performances are Mondays and Tuesdays at 7; Wednesdays through Fridays at 7 and 9; and Saturdays at 5 and 9. Tickets are $35 ($25 for students/seniors) and are available at thefoundrytheatre.org.)

Master is by W. David Hancock, in collaboration with visual artist Wardell Milan. Directed by Taibi Magar. Set Design is by Marsha Ginsberg. Costume Design is by Tilly Grimes. Projection Design is by John Narun. Lighting Design is by Thomas Dunn. Sound Design is by Mikaal Sulaiman. Props Design is by Gian Marco Lo Forte. Creative Producer is Sunder Ganglani.

The cast is Mikeah Jennings and Anne O'Sullivan.