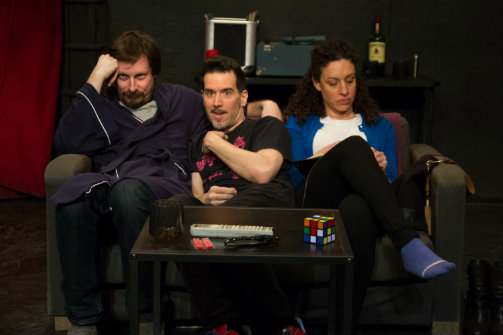 BOTTOM LINE: This dark comedy about one man's battle with addiction is immensely funny with witty dialogue and lots of well-staged physical comedy.

When thirty-something New York City couple Jack (Nat Cassidy) and Crystal (Tricia Alexandro) decide to do cocaine together for the first time, their entire world is changed. Crystal, the experienced one, orders coke from her dealer and gives her boyfriend his first hit, zapping awake a new side to him the second the drug enters his bloodstream. His addiction arrives embodied as a loud, party-happy man (playwright Hollis James) who follows Jack night and day. Later Jack’s therapist tells him "if you can name it, you can tame it," which leads Jack to name his addiction Kyle.

As soon as Jack finishes his first line, Kyle whispers into his ear—telling him to sneak more lines while Crystal is in the bathroom, then telling him to get the dealer’s number ASAP. Thus begins a pattern of using cocaine to meet his writing deadlines and eventually spending all day doing bumps. When Jack and Crystal sit on the couch for a night in front of the television, Kyle sits between them, symbolizing how the addiction has become a wedge in their relationship. As Kyle falls further down the rabbit hole, he will lose all the things he holds dear.

Where Kyle succeeds the most is the physical comedy and witty dialogue, as Cassidy and James play off of each other well, under the direction of Emily Owens. Jack and his new sidekick do absurd, drug-induced dances and have inebriated, geeked-out pop culture discussions that could only have been penned by someone who had lived those very scenes. (In writing Kyle, James is clearly excavating his own dark experiences with addiction). As Jack attempts to battle his addiction the two have a slapstick fight (choreographed by John Gardner) that mixes laugh-out-loud humor with the internal fight Jack is undertaking. Some amusing scenes also involve a rotation of drug dealers (all played by Christian Polanco), with one who becomes a moocher and wants to hang out all night. When Jack resigns himself to a sober lifestyle his drug suppliers call him back, telemarketing style, promising special deals if he returns as a customer.

It might be nice to see more from the darker side of addiction in Kyle. When Jack attends therapy to relieve him of his addiction, he winds up with snappy slogans meant to guide him in his recovery. Giving more of a glimpse into the psychology of an addict and what motivates one to seek out the constant chemical escape of drugs would strengthen this piece and provide more realism to the appealing comedy. Yet there is enough authenticity here due to the real-life experience at the core of this piece. Overall, Kyle is an immensely relatable comedy that allows us to laugh at the self-destructive spirals so many of us slip into at some point in our lives.

(Kyle plays at UNDER St. Marks, 94 St. Marks Place, through March 25, 2017. The running time is 90 minutes. Performances are Thursdays through Saturdays at 7:30. Tickets are $25, $20 student/senior, and are available at horsetrade.info.)