Off Off Broadway, Play
Runs through 8.6.17
IRT Theater, 154 Christopher Street 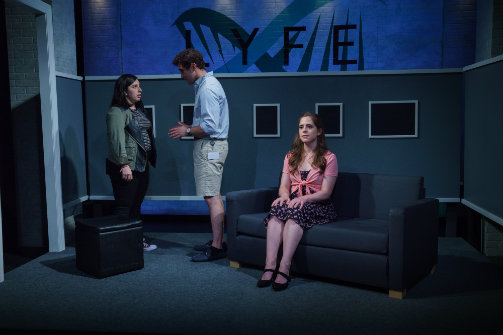 BOTTOM LINE: An android causes problems, as androids so often do.

In Jessica, a new play by Patrick Vermillion, the age-old conflict between science and nature gets a futuristic twist. Allister (Michael Patrick Trimm), a wealthy jerk whose girlfriend went missing four years ago, has had her “brought back” in android form (played by Alli Trussell). His goal, he says, is to re-create Jessica’s psyche so that the “new” Jessica might be able to tell them what happened to the “original” Jessica. To achieve this, he needs Jessica’s best friend, Mari (Anna Nemetz), and sister, Lillian (Alison Scaramella), to interact with the android and fill in the gaps in its memory that he can’t. The women are, to varying degrees, skeptical.

Team Jessica 2.0, which also includes Rudi (Will Sarratt), the engineer who is programming the android, spends most of the play rehashing intellectual arguments that started at least as far back as Mary Shelley’s Frankenstein and continue into the present day in science-fiction films like Ex Machina. Is duplicating someone’s mind possible? If so, is it ethical? What happens if New Jessica does indeed help locate Original Jessica and now there are two Jessicas in the world? However, the core conflict between Jessica’s loved ones is over who Jessica really was—a loving girlfriend, a self-absorbed head case, or a flawed but loyal confidant?

Jessica teases some intriguing gender issues that ultimately don’t pay off: Allister is so overbearing and obnoxious from the outset that one starts to think this play is less about memory and identity than about misogyny and relationship violence. But ultimately Vermillion is more interested in examining the boundaries of love and intimacy. The second act is more urgent than the first, due largely to Trussell‘s performance (yes, the android is the most interesting character). Director Emily Jackson keeps the action moving at a brisk pace, even if the dialogue tends to run in circles.

Longer and more verbose than it needs to be, Jessica is reasonably engaging but doesn’t add anything especially earth-shattering to the A.I. genre. But don’t despair—more android-centric sci-fi is just around the corner (Blade Runner 2049 comes out in October)!

(Jessica plays at IRT Theater, 154 Christopher Street, through August 6, 2017. The running time is one hour and 45 minutes with an intermission. Performances are Tuesdays through Saturdays at 8 and Sundays at 3. Tickets are $18 in advance, $25 at the door and are available at sanguinenyc.com or by calling 800-838-3006.)

Jessica is by Patrick Vermillion. Directed by Emily Jackson. Set and Lighting Design are by Tyler M. Perry. Costume Design is by Amanda Aiken. Sound Design is by John McKenna. Stage Manager is Raquel Loving.