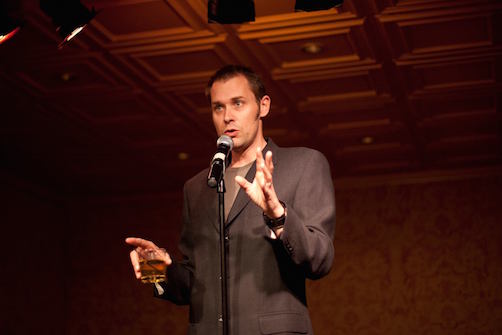 Brad Lawrence in a previous production of The Idaho Jackson Action Playset. Photo by Ryan Collerd.

BOTTOM LINE: Brad Lawrence marries the heartwarming nostalgia of a John Hughes film to the fear-inspiring trials of childhood with his top notch storytelling.

In The Idaho Jackson Action Playset, Brad Lawrence presents a sure-to-please spread of storytelling and stand-up comedy. His rattling mode of speech grips you, and he provides plenty of witty punchlines, capping off even the most sentimental memory with a nihilistic afterthought. Even the title is a commentary on his "knock-off childhood": Lawrence always felt slightly soured by the lack of authenticity in his 1980s young life, instead having to settle for hand-me-down clothes a size too big and sad wannabe action figures.

As Lawrence recounts the fumbles of his childhood in Missouri, he wears large, dark-framed glasses that make his large blue eyes appear even more childlike, perfectly paired with a graphic tee of Wilma Deering in her space helmet from Buck Rodgers. Lawrence begins with an awkward story that most everyone has: a first kiss. Unlike most people, though, he had his in front of his entire second grade class as a valiant act of defiance. He then recaps his first big fight and how he came to be known as the terrifying "Lunchbox Lawrence" that the grade school bullies knew not to mess with.

All of his stories are tinted with the energy of a child lost at sea, trying desperately to figure it all out. Lawrence evokes a sense of nostalgia as we remember the clumsiness of our first kiss, the sleepless nights we spent worrying about monsters (or the AIDS epidemic), and the first time we realized that sometimes adults don’t have all of the answers. In just under an hour, Lawrence is able to summarize the delicate shifts that we all must inevitably face in the transition out of childhood, and hone in on the central truth that adulthood isn’t about figuring it all out, but having the style and grace to make it up as you go.

The Idaho Jackson Action Playset is written and performed by Brad Lawrence. Directed by Cyndi Freeman. Produced by Nefarious Laboratory.