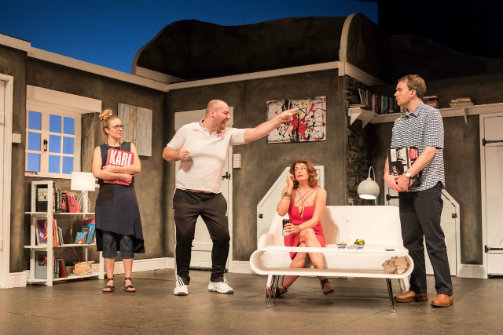 BOTTOM LINE: This clever, laugh-inducing play provides plenty of comedic relief along with some deeper thoughts regarding class.

Visiting from across the pond through this year's Brits Off Broadway festival is Invincible, playwright Torben Betts' newest effort exploring British class divisions. While the play premiered in London in 2014, it bears great relevancy to this month's current state of affairs. Emily (Emily Bowker) and Oliver (Alastair Whatley), a left-leaning middle class couple, decide to leave their home in London for a working class town in Northern England when Oliver loses his government job as a result of the recession. The two cringe at their new neighbors, who enjoy decorating the street with giant flags declaring their loyalty for football teams. Yet despite their misgivings, Emily and Oliver decide to invite over these same neighbors, as to get to know them better. Dawn (Elizabeth Boag) and her husband Alan (Graeme Brooks) are flabbergasted that the only beverage offered to them by the tightly wound Emily is jasmine tea, so they run back to bring over their own box of canned beer, which Oliver chugs throughout the evening.

Perhaps unsurprisingly, the evening is rife with misunderstandings. Upon seeing the large Karl Marx book on the coffee table, placed there by Emily in the hopes of launching some political debate, Alan declares that he does "quite like some of the old style comedians." Emily presses the issue, wanting to turn the impersonal chit chat political, hoping for her less privileged neighbors to join her in criticizing class divisions. Ironically, Emily's insistence upon delivering her ideas regarding Marxist ideologies only serves to further cement the gap between her and her less educated neighbors, emphasizing her own sense of superiority.

The characters themselves are stereotypes, both of those on the left who dabble in abstract painting, to the philistine postman who chugs beer and devotes his life to football fandom. As Invincible goes on, however, these stereotypes become more complex and the sitcom humor widens and deepens into something far more thought-provoking. We soon learn that Emily's seeming prudishness and vocal disinterest in alcohol and sex stems from a tragedy that the couple is still recovering from. And while the characters' struggles are a result of the 2008 recession, the issues raised are relevant to the current British political climate in the wake of Brexit, and an election that resulted in a hung parliament.

Each of the actors succeeds in transitioning their character from a superficial comedic sketch to a more complex and emotionally dramatic performance. Under the guidance of director Stephen Darcy, Graeme Brookes shows a skill for physical comedy, soliciting most of the laughter in the production. Emily Bowker, as the tight-laced Emily, also succeeds in portraying a thoroughly obnoxious character who later becomes worthy of our sympathy. The detailed set, nearly identical to the one used in the company's British production, successfully evokes the setting and tone of the piece. Invincible offers plenty of opportunity for laughter in its clash-of-the-cultures comedy, but also surprises you with plenty of touching drama and food for thought.