Off Off Broadway, Play
Extended through 10.1.17
The Flea Theater, 20 Thomas Street 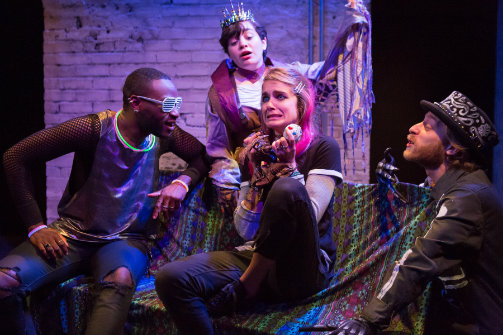 Erica (Lacy Allen) is sexually aroused by inanimate objects. “It’s not sex in the way you’d think of sex . . .it’s mostly . . .touching. Rubbing. That sort of thing,” she explains to her would-be boyfriend and fellow Dairy Queen employee Kevin (Maki Borden). Erica confesses to Kevin that the love of her life is Dee (Philip Feldman), a Dairy Queen sign that captures Erica’s lust and drives her to secure a position as an ice cream jerker.

Nick Robideau’s new play explores the phenomenon of Objectum (or Object) sexuality, defined by Objectùm-Sexuality Internationale as “an orientation to love objects.” Apparently, OS Internationale offers support for those who identify as “objectum-sexuals.” After it’s mentioned in the play, I couldn’t resist googling the organization to see if it’s real or a product of the playwright’s creative imagination. Oh no. It’s real.

The play is performed by The Bats, the Flea Theatre’s resident acting ensemble that creates opportunities for young actors to gain professional experience. The Bats do a wonderful job with this material. Lacy Allen stands out as the central character, portraying Erica’s quirky sexuality without turning it into an SNL skit. She earned my sympathy and managed to convince me that her lifestyle is the source of great distress and challenge.

Director Courtney Ulrich tastefully navigates delicate intimate moments involving a can opener. And she also shines in her beautiful staging of Dee’s final demise. Sarah Lawrence turns in an artful costume design that avoids the trap of being relentlessly literal. Ensemble members play the inanimate objects with which Erica pleasures herself; Lawrence’s costumes mimic the color scheme of each object allowing the viewer to feel intelligent when they figure out which item is being animated.

I had never heard of OS before seeing Inanimate, and my curiosity is now piqued. But the play feels conflicted in tone and genre. Is this a ridiculous, quirky comedy or an honest exploration intended to challenge our tolerance of an alternative lifestyle that may seem too peculiar to accept? My sense is that playwright Nick Robideau would like us to bring an open mind and take objectophilia seriously, but is ready to dismiss it with hilarity if things get too weird. I would have found this play much more brave and compelling had Robideau not offered me an out. I prefer to be challenged and confronted by my limitations, rather than invited to laugh at people who harbor ostensibly strange sexual appetites.

How often is a playwright so courageous as to shed light on something so peculiar? Not often enough, in my opinion. Robideau definitely deserves credit for tackling this subject, but I’m hoping this production of Inanimate will embolden him to work out his residual self-consciousness in the next draft.

Inanimate is by Nick Robideau. Directed by Courney Ulrich. Set Design is by Yu-Hsuan Chen. Costume Design is by Sarah Lawrence. Lighting Design is by Becky Heisler McCarthy. Sound Design is by Megan Culley. Stage Manager is Gina Solebello.