How To Sell Your Gang Rape Baby*
*For Parts 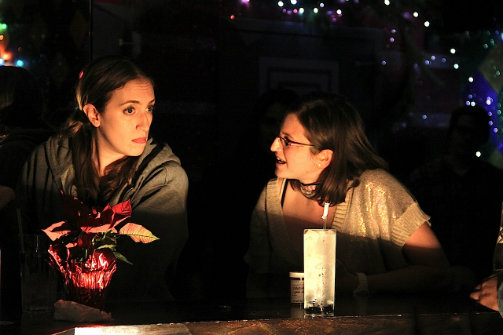 Ali Ayala and Libby Emmons in How to Sell Your Gang Rape Baby* *For Parts.

BOTTOM LINE: A scarily offensive play in which a gang rape creates a great business venture for two women who are out of options.

Libby and Ali (Libby Emmons and Ali Ayala) are the least human Human Resources reps you will ever meet. Huddled up at their desk with their cups of tea and oversized Cheetos bag, they entertain themselves with… well, what else? Office gossip of course. The latest? Trump-supporting intern Bev-Ann apparently "let herself" get gang-raped by an entire football team last weekend and is knocked up. Together, Puss n Puss —as they affectionately call each other—put their minds together to help the girl. This all happens in the first scene of Emmons’ play How to Sell your Gang Rape Baby* *For Parts, directed by Michele Travis.

Abortion for Bev-Ann is on the table for a little bit. Eventually, however, the duo finds a win-win-win scenario: they’ll sell the baby on the black market "for parts," That way, they’ll make a healthy profit, Bev-Ann will be out of trouble, and so many lives will be saved by the unwanted baby’s organs.

The plot does not stop there in its absurdity. Other plot lines to follow include: a transitioning transwoman; the man who fell in love with Cynthia Rosita, a sex doll; the brutal murder of a colleague at a company-wide team building retreat; and then some sort of resolution in which we see the two leads ponder the different ways they can sell their bodies to achieve their dreams.

I’ll say this: it is undeniable that Emmons and Ayala are brave to dip their toes in very muddy and complex waters. By tackling subject matter that is often seen as too serious to be joked about, the creative team makes great use of a festival like Frigid to test out material and see what lands and what sinks.

Perhaps Emmons is trying to make us realize that even rape is political. Is this diverse, downtown New York audience comfortable laughing if we know the rape victim is a conservative? Libby asks "Why did she vote for Trump if she didn’t want to get raped?," pushing the victim-blame game even further.

The look of confusion and cringe on my face was shared by my fellow audience members, paired with the occasional hearty laugh. A few quips are golden, particularly a bit on amputation: Libby, suggesting that you should have to eat the limb they cut off, ponders “Is that cannibalism or up-cycling?” Amidst the absurdity are other witty moments: crowd-sourcing abortions, marrying a sex doll, and ass-fat boob jobs. These moments—that took me out of the awkward and uncomfortable towing of a very dangerous line—are the ones I want to remember about this play. Unfortunately, the good jokes get lost in a cesspool of ones on human trafficking, the value of black lives, transsexuality, and the rape of babies (among other rapes).

I couldn’t quite grasp who these women are. Sure, liberal feminist New Yorkers are not immune from partaking in the vicious cycle of victim-blaming and slut-shaming rape victims. However, Emmons' text does not feel like it intended to present an illustration of what Roxanne Gay calls Bad Feminism. Instead, she creates a pair of characters who don’t feel close enough to reality that we can treat this as satire. Who are these women who call themselves liberal but who will press on with comments like "she was stupid, that’s what she gets" and who repeatedly refer to an abortion as "killing a baby"?

The Puss n Puss team might be over-relying on the shock value of their highly offensive play. The journey of an audience member goes from feeling like we’re simply watching flippant characters to a feeling that we’re being flipped off by the artists. While this is perhaps the point, I mostly think audiences will leave feeling less shocked and more confused.

How To Sell Your Gang Rape Baby* *For Parts is by Libby Emmons. Directed by Michele Travis. Dramaturgy by Brad Rothbart. Stage Manager is Michele O'Brien.

The cast is Libby Emmons and Ali Ayala.