Home for the Holidays:
The Broadway Concert Celebration 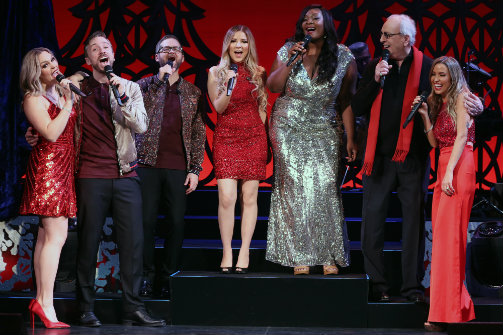 BOTTOM LINE: An early Christmas present for fans of American Idol, The Voice…and anybody who remembers the guy who played Cher’s fiancé in Moonstruck.

First, there was a reality show President. Now, we have the reality show Christmas concert. Home for Holidays brings some reality (and YouTube) stars to Broadway, just in time to spread holiday cheer and make a quick buck before Mean Girls takes over the August Wilson Theatre. Lackluster production values and bizarre narration suggest this concert was put together in the cheapest and fastest way possible. In other words, Home for the Holidays is less Radio City Christmas Spectacular and more low-budget 1970s variety show, the kind where David Bowie would duet with Bing Crosby.

It’s too bad, because the performers are talented. Candice Glover, winner of season twelve of American Idol, steals the show with a silky, soulful belt. She soars through traditional carols and cheesy pop standards like “Where Are You, Christmas?” Josh Kaufman, the singer/songwriter who won season six of The Voice, rocks “A New York Christmas” and “All I Want for Christmas Is You,” even if his geeky stage presence clashes with his sultry vocals. Bianca Ryan, just eleven years old when she won the first America’s Got Talent twelve years ago, has grown into a confident and capable singer. Unfortunately, she is also transforming into a Mariah Carey clone, and her big voice gets lost amidst overdone riffs. Weirdly, these talent show winners always seem to be singing in their own private bubbles, even when sharing the stage. They rarely look at each other and seldom speak.

Meanwhile, Peter and Evynne Hollens, singing stars on YouTube, croon with a polished, smiling charm, like 21st-century versions of Steve Lawrence and Eydie Gormé. Unlike their reality show counterparts, they actually interact with other singers. Sadly, they are often relegated to backing vocals.

Home for the Holidays features two ersatz narrators, Academy Award-nominee Danny Aiello (billed as a "special appearance") and Bachelorette-veteran Kaitlyn Bristowe (billed as "host.") They’re an odd pair, and they don’t have much to do. Bristowe recites a few platitudes about Christmas music and home with brisk, TV-host delivery. Aiello, who earned an Oscar nomination for Do the Right Thing and was in Moonstruck (and Madonna's "Papa Don't Preach" video), gets to reminisce about a gritty New York childhood…that might not be his. At one point, he recalls the marquee of Radio City shining through the show in December 1945, then adds “I don’t know if this really happened.”

Jonathan Tessero provides the creative and musical direction, and doubles as conductor and pianist. While he can’t find a common narrative thread to unite the evening, his energetic conducting imbues even the most syrupy songs with energy. Every band member gets his or her moment in the spotlight, from the dancing horn players (Enrique Sanchez, Luke Stafford, and Adison Evans) to the percussionist (Justin Jones). Jason Kantrowitz’s glitzy lighting design adds glamour to a set that's apparently made up of giant white paper trees. As wardrobe stylist, James Brown III has choreographed an impressive series of costume changes. In true reality show style, the women’s gowns grow more sparkly as the evening wears on.

For those who aren't superfans of televised singing competitions, sitting through this concert might be like eating overdone ham smothered in cheese. Not good for you, but mildly enjoyable, in its own way. Yet on the night I saw Home for the Holidays, the audience cheered every high note and key change. So I can’t be a complete Grinch and dismiss a show that lets people see their "Idols" live on stage. I only wish this concert was better produced.