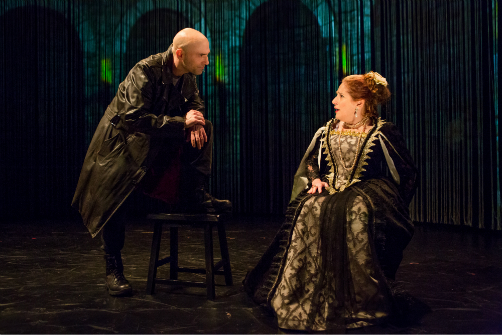 Khris Lewin and Joy Hermalyn in Hamlet, A Version. Photo by Jeremy Daniel.

BOTTOM LINE: Shakespeare’s Hamlet, made into a detective story, investigates international political intrigues and flirts with the dichotomy between fiction and reality.

Shakespeare’s Hamlet, dramatized as a murder mystery by the famous Russian dissident writer Boris Akunin, is not about the prince of Denmark at all. As played by Matt Weiss, Hamlet is a clumsy, down-to-earth creature, spending half of his time drinking and the other half hungover. Although the play is named after him, Hamlet is not at the center of this adaptation, but a mere puppet in the hands of political schemers.

Playwright Akunin, mostly known for his series of detective novels set in nineteenth-century Russia, investigates Hamlet like a homicide case and presents his speculation in Hamlet. A Version. Keeping the pivotal points of the classical text largely intact, Akunin shifts the focus to Horatio, Hamlet’s friend. A self-proclaimed "explorer of human nature," Horatio (portrayed by Khris Lewin) is a quick-minded and competent young man, standing out in the Danish court with his modern clothes and significantly less stylized speech. Perhaps the production overpromises a bit by presenting Horatio as a bird entirely different from the flock, but to say more would spoil the plot.

As the audience is still chatting and leafing through their programs, the actors, only half costumed, casually appear on stage one by one. They warm up and interact quietly as they pull out shirts and skirts from the pile of clothes in the middle of the stage and put them on, slowly transitioning into character and adding one more layer to this nesting doll of a play. Heather Klar's monochrome yet detailed Elizabethan costumes are comforting to the eye...that is, until Horatio appears. His black leather trench coat, lined with scarlet silk, and military boots are just a few elements short of a Nazi uniform. Hamlet addresses the fact that his friend is dressed in a foreign fashion but nobody seems to be too suspicious.

Speaking of trench coats, Morpheus from The Matrix comes to mind during this production due to the amount of computer graphics it employs. In Michael Ivanishvili's projection design, CG castle walls are blooming with flowers, or bursting with the chaotic movement of giant bugs. The ghost of Hamlet’s father is also a projection that causes the entire picture to glitch. Unfortunately in Hamlet. A Version, the design takes one step beyond the text, making a big reveal in the end rather disappointing. Throughout the show, a cast of nine fine actors seem unsure of what they are doing, lost between the flat presentation of Shakespeare, infusion of political plotting by Akunin, and the bold design, which tricks you into thinking that things are more complicated than they are.

As a theatrical event, Hamlet. A Version, is an undercooked dish. But the ambitious and fresh interpretation of the classics, slick minimalistic design and potent cast make for good ingredients and hold the show afloat. Much like in an action blockbuster, some inconsistencies are left unresolved, leaving the audience wanting more answers.

(Hamlet. A Version plays at the Theatre at St. Clement’s, 423 West 46th Street, through May 7, 2017. The running time is one hour and forty minutes with no intermission. Performances are Monday-Thursday at 8 and Sunday at 3. Tickets are $18 and are available at akuninhamlet.com.)

Hamlet. A Version is by Boris Akunin. Directed by Irina Gachechiladze. Music Composed by Giya Kancheli. Translation by Ileana Alexandra Orlich. Costume Design is by Heather Klar. Sound & Projections by Sam Kusnetz. Projection Design is by Michael Ivanishvili. Lighting Design is by Isabella Byrd. Set Design is by Cate McCrea.