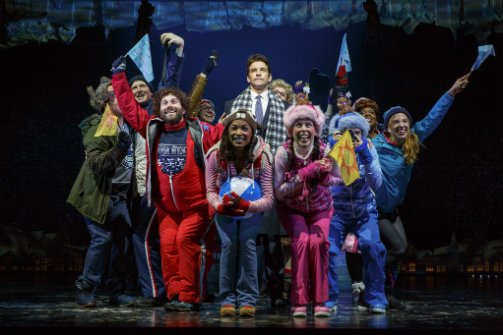 Andy Karl and the company of Groundhog Day. Photo by Joan Marcus.

BOTTOM LINE: A brilliant creative team and an outstanding leading man make this musical version of the beloved ‘90s movie an experience you’ll be happy to repeat.

Broadway producers, and audiences for the most part, love musicals based on movies. Shows currently running that are screen-to-stage adaptations include The Lion King, Aladdin, Kinky Boots, School of Rock, Sunset Boulevard…I could go on. These productions are no-brainers because they take material theatergoers are already familiar with and add music and/or dancing. Personally, I tend to be skeptical of these projects—yeah, I liked Amélie as a film, but I’m not sure I need to see her sing. That’s the attitude I took into Groundhog Day, yet another movie-turned-musical opening here in New York after premiering in London last year.

Thankfully, I had reasons to be a bit more optimistic than I normally would. The team behind Groundhog Day is the same one that created Matilda the Musical, a show I adored. (But wasn’t that a movie too, you ask? Actually it was a book first. Totally different.) The star of the show, grappling with the legacy of Bill Murray‘s performance in the 1993 film, is Andy Karl, a two-time Tony nominee and possibly the hunkiest man on Broadway. If a good stage musical of Groundhog Day was in any way, shape or form possible, these people were the ones who could make it happen.

Composer-lyricist Tim Minchin, director Matthew Warchus and choreographer Peter Darling were clearly destined to work on musicals together, having discovered the key to making even the most jaded audience member laugh, gasp, and sniff back tears. (For the record, both Matilda and Groundhog Day won Best Musical at the Olivier Awards, London’s version of the Tonys.) Minchin demonstrates in this, his second stage score, that he’s as comfortable with American musical idioms as with British ones, with songs ranging in style from hard rock to country to straight-up ballads. Warchus’ staging is a marvel, handling the show’s tricky conceit—a single day being repeated over and over with no end in sight—to breathtaking effect. And it’s safe to say there’s no current Broadway cast having more fun than this one, thanks largely to Darling’s no-holds-barred dance numbers.

Groundhog Day’s book was written by Danny Rubin, based on his own screenplay (with the late Harold Ramis) about Phil Connors, a TV weatherman, getting caught in a time loop in snowy Punxsutawney, PA; ultimately, he works out his karma and learns to be a decent human being. How fortunate Rubin has been, first to have Bill Murray starring in the film version, and then to have Andy Karl, a talent just waiting for his breakout moment, taking Phil on this time around. In a two-decade career, Karl has mostly played supporting parts; his first lead Broadway role was in 2014’s ill-fated Rocky (yep, another movie-turned-musical). As the cynical and egomaniacal Connors, he finally gets the chance to show his full range: funny, sexy, athletic, and graceful, he makes us root for Phil even when he’s being a crude and clueless jerk. (Side note: this show is not for young kids; sexual content and four-letter words abound.)

Despite the fact that Karl is barely ever offstage, his co-stars (in a commendably diverse cast) get their spotlight moments too. Barrett Doss is adorable as Rita, the news producer Phil falls for in spite of himself, and Andrew Call and Raymond J. Lee are a riot as two drunk townies who become a desperate Phil’s partners in crime in a number called “Nobody Cares.” Another star is Rob Howell’s playful and inventive set design (see the aforementioned “Nobody Cares,” which includes an aerial view of a car chase); Howell gets extra credit for designing the costumes as well.

You may have only vague memories of Groundhog Day the movie (it is, after all, 24 years old), or you may be a superfan who, like Phil Connors himself, has revisited it repeatedly. Either way, the show works. It gives restless audience members plenty of razzmatazz, while drawing in the more pensive ones with its surprisingly complex critique of American culture and our search for meaning in the modern world. Overall, I will remain skeptical of musical movie adaptations, but I hope to be proven wrong by successes like Groundhog Day more often.

(Groundhog Day plays at the August Wilson Theatre, 245 West 52nd Street, in an open run. The running time is two hours and 40 minutes with an intermission. Performances are Tuesdays at 7; Wednesdays at 2 and 8; Thursdays at 7; Fridays at 8; Saturdays at 2 and 8; and Sundays at 3. Tickets are $79-$249 and are available at ticketmaster.com or by calling 877-250-2929. For more information visit groundhogdaymusical.com.)