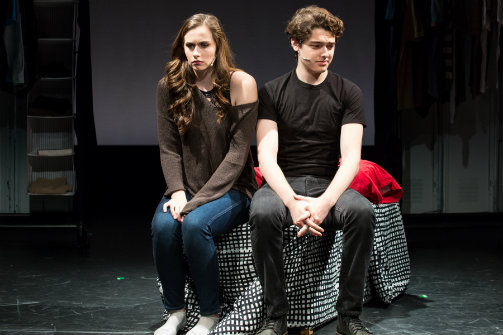 Brett Hargrave and Dante Palminteri in Generation Me. Photo by Shira Friedman Photography.

BOTTOM LINE: An emotionally gripping musical focused on teen suicide and its aftermath.

It’s not exactly a revelation that many non-jocks hate high school. There’s the constant pressure of schoolwork and the stress of making the grade to ensure future options. More importantly, there’s the social stuff, the waxing and waning of friendships, the urgency to date (or not), the urgency to put out (or not), the bullying, and the gender-based double standards that can mark you as a prude, a slut, or a mess. It’s obviously fraught, and as we well know, the he-said/she-said of adolescence can go viral in a heartbeat thanks to social media.

Just ask the 15 kids in Generation Me, a two-hour musical exploration of coming-of-age circa 2017.  In song, dance, and dialogue, the cast reflects on the suicide of tenth-grader Milo Reynolds (Milo Manheim), a well-liked guy who seemed to have a whole lot going for him. As you’d expect, Milo’s death rocks his circle of friends; as they try to figure out the whys-and-wherefores, a host of precipitating factors emerge. It’s a gripping, if common, tale of parental abuse, romantic confusion, and a perceived betrayal by someone once considered a close friend. There’s tragedy here, and pathos.

Yes, it’s an admittedly odd subject for this theatrical genre. Suffice it to say that it not only works, it works well. First, the cast members—a few still in high school and several entering college for the first time this fall—are uniformly excellent. There’s Kaylee Summers (Julia Nightingale), Milo’s on-again/off-again girlfriend, who refuses to report a sexual assault by a twelfth-grader because she flirted with the boy and did not resist his advances. There’s Harper Ellis (Anabella Ronson-Benenati), known by the derisive nickname “Slice” because of her tendency to cut herself. There’s the judgmental queen bee, here named Addison DeVoe (Celia Hottenstein), who can seemingly move group members from “in” to “out” at random. And there’s Cody (Will Meyers), Milo’s longtime best friend and confidante, with whom he’d recently clashed. When it is revealed that a series of calls and texts from Milo to Cody on the morning of his death went unanswered, the audience can only begin to imagine the guilt that Cody will carry for the rest of his life.

There is nothing preachy in Generation Me, but it’s heavy stuff. The music (written by Will Finan with orchestration by Conor Keelan) sidesteps clichés to address compelling themes. The seventeen songs—standouts are "I Thought It Was Me," "Tell Me What Happened," and "We Had It All"— include some that are tear-inducing. Missing, however, are adults—not only parents, but teachers and other professionals--and one can only wonder about their lack of presence. Are they oblivious? Uncaring? Overwhelmed?

We’re never told. Instead, we’re left knowing that Milo might not have taken his life if someone had noticed his despair and reached out to him. That they didn’t is both thought-provoking and sobering, reminding us of how little we know of one another and how much is potentially at stake when we pay scant attention to the people in our orbit.

Generation Me is by Julie Soto. Directed by Ryan Warren. Choreography is by Jacob Montoya. Scenic Design is by Scarlet Jacobs. Lighting Design is by Nick Solyom. Music is by Will Finan. Orchestration is by Conor Keelan. Costume Design is by Molly Seidel. Casting Director is Michael Cassara.