Co-conceived, designed, and directed by Ximena Garnica and Shige Moriya
Presented by LEIMAY 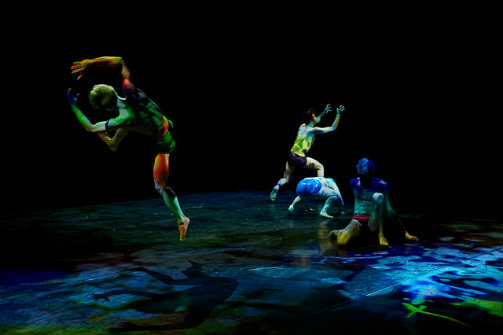 The LEIMAY ensemble in Frantic Beauty. Photo by Jeremy Tressler.

The concept of beauty is fundamentally subjective, our perceptions thereof a mix of cultural conditioning, aesthetic theory, and personal taste. While many societies portray beauty as a state of tranquil perfection, LEIMAY’s Frantic Beauty actively disrupts this view, its butoh-driven choreography finding beauty in the chaotic, distorted, and darker sides of existence.

The middle installment of BECOMING, LEIMAY’s five-part dance series on change and transfiguration, Frantic Beauty steeps itself in the tradition of butoh, a distinctive post-WWII Japanese performance practice. With its celebration of the grotesque, tortured, and animalistic, butoh forms the perfect lens through which to challenge traditional notions of beauty and better explore BECOMING’s larger themes.

Under the guidance of director-choreographer Ximena Garnica, LEIMAY’s ensemble (Masanori Asahara, Krystel Copper, Derek DiMartini, Omer Ephron, and Mario Galeano) defies aesthetic convention and physical limits. With movements both otherworldly and primal, its dancers form uncanny configurations, skittering like insects, writhing in torment or ecstasy, melting into fetal curls or jerking as if electro-shocked. These striking sequences echo the ageless dichotomy between beauty and suffering, speaking to the often painful pursuit of ideals and the paradoxical value we give to that which is finite.

In its use of such butoh conventions as tight pacing and physical and vocal repetition, Frantic Beauty furthers its dialogue between earthiness and transcendence. The piece cycles through periods of prolonged stillness and manic activity, jumping from slow, infinitesimal movements into the frenzied contortions from which its name derives. As dancers rhythmically pound the floor with grunts or shrieks, or murmur chants with arms flailed skyward, they seem to enact an ancient ritual, primitive and holy. Guided more by the piece’s thematic throughline than a narrative trajectory, we ascribe our own meanings, watching individuals confront inner and outer strife, move through nuanced and often painful metamorphoses, beg assistance from on high, and rest in tranquility or death before starting anew.

Rooted in a stylized, anti-harmonic dance form, Frantic Beauty calls on us to broaden our definition of beauty and find it in all aspects of experience. Its dissonance may jar audience sensibilities, but this unconventionality only strengthens Garnica and Moriya’s conceptual points. By which standards, it asks, do we measure beauty? Can we find it in that which we deem ugly, bizarre, tragic, or crude? Is the tortuous path to grace as beautiful as the end result we seek, and can we maintain stillness and peace amidst constant change?

Our current cultural moment makes Frantic Beauty’s message especially urgent: as instances of human and natural chaos confront us daily, the piece’s call to embrace life’s darkness moves from theoretic appeal to survival tactic. Artistic tastes notwithstanding, discerning eyes will appreciate LEIMAY’s virtuosity and find value in the show’s strange beauty. If we carry this openness beyond the theatre, richer and deeper treasures may emerge.