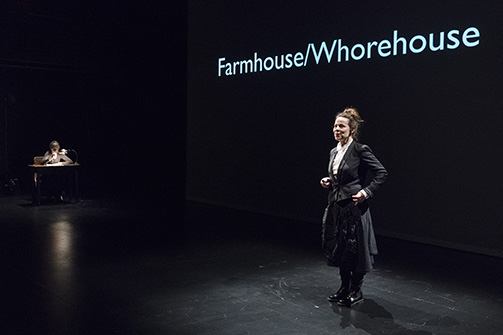 BOTTOM LINE: Suzanne Bocanegra speaks though Lili Taylor, delivering a lecture on the dual perception of woman as a Mother and a Whore.

As a kid, New York conceptual artist Suzanne Bocanegra often visited her grandparents’ farm in Texas. Across the road was—you guessed it—a brothel. And not just any brothel, but the infamous "Chicken Ranch" that inspired the 1978 Broadway musical The Best Little Whorehouse in Texas and its 1982 film adaptation. Combining her childhood memories, later life events, anthropological research and pop culture references, Bocanegra reflects on womanhood at large in Farmhouse/Whorehouse: An Artist Lecture by Suzanne Bocanegra starring Lili Taylor.

As announced in the title, the show features film and stage actress Taylor (most recently seen on Broadway in Marvin’s Room). For the duration of the hour, directed by Lee Sunday Evans, Taylor stands in a square of light, flipping slides on the large screen above and delivering "the lecture." Bocanegra is also present on stage opposite the actress; she monotonically reads notes into a microphone, bent over a desk lit by a single lamp. Taylor, who has an earpiece, repeats what she hears with the skill of a seasoned news broadcaster, handling every word with great care.

The actress wears a black skirt over black pants, a style inspired by the nineteenth-century Oneida religious community. The lecture is seemingly organized by the principle of free association, as Bocanegra discusses other utopian socio-agrarian projects, like that of eighteenth-century philosopher Charles Fourier, or hippie communes across the US in the 1960s and '70s. Another cluster of topics concerns prostitution and is illustrated with paintings by French surrealists and photographs of the real-life Chicken Ranch.

Whether speaking about women pioneers, paintings of peasants by Jean Francois Millet, or prostitution in Paris in the 1800s, Bocanegra connects her findings to her own experiences. Conversely, the events of her own life—interactions with her grandparents, being pregnant, or climbing up five flights of stairs loaded with groceries and kids—fuel the artist’s thoughts. It can be difficult to follow the non-linear narrative, accompanied by slides pulled from all over the place (among them: pregnant belly cakes found on the Internet, Monet paintings, and video fragments of popular movies). It also takes time to get used to the echoing speech of the writer and actress.

Farmhouse/Whorehouse is deeply personal yet not too sentimental and, being a lecture, teaches you a thing or two. Bocanegra humanizes the experiences of both marginalized and heroic women alike. She uses the duality of woman as saint or whore to structure the presentation and show the inadequacy and limitations of these categories.

(Farmhouse/Whorehouse: An Artist Lecture by Suzanne Bocanegra starring Lili Taylor played at BAM Fisher, 321 Ashland Place, though December 16, 2017. The running time was 1 hour with no intermission. Tickets were $25. For more information visit bam.org.)

The cast is Suzanne Bocanegra and Lili Taylor.