Off Off Broadway, Play
Runs through 2.18.17
The Brick, 579 Metropolitan Avenue, Brooklyn 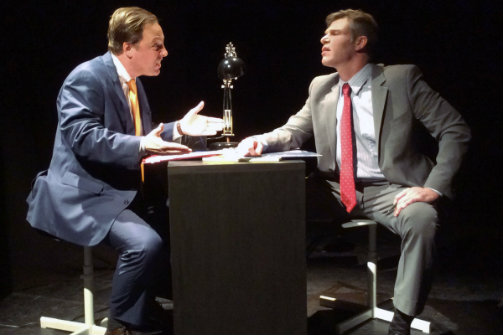 BOTTOM LINE: Brian Parks's new play about business culture does anything but dignify the rat race.

If theatre aims to question what we find normal, there's nothing more normal for many New Yorkers than the language and habits of office culture. Like the four characters in Enterprise, the androgynous Landry (Adam Files), Owens (Alyssa Simon), Sanders (Fred Backus), and Weaver (Derrick Peterson), a day is spent moving through a series of well-rehearsed stock jokes around requesting copier toner, running downstairs for coffee, and discussing the latest best-selling work philosophy book over plastic-covered proposals.

Enterprise jumps out of the starting gate, grinding these normalcies into absurdities using shorthand. As the four characters ride in an elevator up to the high floor of their office building, where they work in some vague white-collar capacity to provide some unexplained good or service to the masses, they discuss a recent conference in rapid-fire sentence fragments: "People like handouts," "Pointing at things," and "On daises" communicate complete thoughts as the elevator doors open.

The design of this office is similarly abbreviated. The Brick's mostly-black box space contains four schoolroom-sized desks with small office lamps and folders sitting in small neat piles. This seems to be a pre-computer world, or an alternate universe where neither the computer nor the typewriter were invented, but the copier reigns supreme. It's difficult to place the company in time. The lighting is dim and yellow, conjuring up visions of Dickensian poverty and The Producers' "Unhappy" bullpen environment, rather than the glass and fluorescence that appear in the language of Enterprise. It's a testament to the language that the contradiction of the space can be easily ignored.

Parks' writing has been compared to Ionesco's, and shares its habit of removing its characters' filters to drive the action. A lack of diplomacy in the workplace speeds up normal behavior and quickly spins scenes out of control. Perhaps this is why Enterprise can't linger on any one thought or beat. There are perhaps fifty scenes in this seventy-minute comedy, as small office rituals fly off the handle and are reset in blackout under bouncy music.

Apart from this speed and choppiness, the structure of Enterprise comes straight out of Aristotle's handbook for tragedy. The company is doing well; then the company faces a crisis. Owens, Weaver, Sanders, and Landry interchangeably work together to write a proposal that will save the company with the hope of personal reward and advancement, and then the group fractures. What goes up must come down.

Disembodied capitalism has always been low-hanging fruit for artists. Modern neo-liberalism adds some relevance to this work, but otherwise it might have appeared onstage ten, twenty, or thirty years ago. It doesn't attempt to address or pinpoint the particular office behaviors of, for example, a startup workplace, or one in crisis for any political reason. It just highlights the comedic despair and disembodiment caused by "business as usual"—a sort of short-form, Ionesco-flavored take on The Office. It's a good time and perhaps a reminder of the strangeness of that kind of life for those who live it every day. Those who don't recognize their coworkers or themselves in Landry, Owens, Weaver or Sanders will still have fun with phrases like "The Chairman, his clear blue eyes... like sea ice," and deconstructed reflections on paperclips.

(Enterprise plays at the Brick, 579 Metropolitan Avenue, through February 18, 2017. The running time is one hour and ten minutes with no intermission. Performances are Mondays, Thursdays, Fridays, and Saturdays at 8. Additional Sunday performances: February 5 at 8 and February 12 at 4. Tickets are $18 and can be purchased at bricktheater.com or by calling 866-811-4111.)