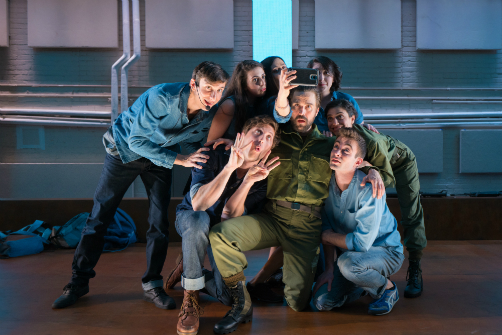 BOTTOM LINE: Diaspora mixes the drama of the past with the story of present-day young adults exploring their sexuality, friendships, and ancestry on a free trip to Israel.

Diaspora, Nathaniel Sam Shapiro's new comedic drama, juxtaposes two storylines that take place at a single location at two different points in time. The action is set at Masada, a large plateau in Israel, in both the present and the year 73 CE. This show explores the question, “What is a Jew?” and the response is golden: “Someone who answers a question with another question.”

Shapiro's play, directed by Saheem Ali, follows two paths. In Masada 73 CE, a settlement of Jewish people have gathered atop the rock after the fall of the holy temple in Jerusalem. Romans are at the base of the fortress on Masada, but with food and water running low, it seems like there might not be any hope for the Jews. Group leader Eleazar (Joe Tapper) presents their choices: dying by God's hand, or the Romans' hands. As this plot line progresses, we see Achinoam (Ava Eisenson) and Tzillah (Maggie Metnick) influencing the young Chawwah (Serena Berman), whose parents have been killed.

Switching back to present-day Masada, we join a group of young college-aged American Jews on Birthright, a "free ten day heritage trip" to Israel for young Jewish adults. Hiking to the top of Masada to see the sun rise and explore the remains of the fortress is a common part of most Birthright trips. In this part of the story, we follow three high school friends who have been drifting apart since going to different colleges. Olivia (Connie Castanzo) serves as a narrator, telling us about Hannah (Berman), a friend who is recently single and crushing on Jeremy (Tom McVey), and Rachel (Metnick), who seems to be connecting with Jeremy over Yad Vashem, the Holocaust Memorial...which Hannah can only think about having sex in. Then there's Cameron (Quinn Franzen), another group member, who doesn't remember hooking up with Olivia; two Israeli soldiers, Or (Eisenson) and Lior (Tapper) who give a different perspective of Israel; and last but not least the tour guide Brett (RJ Vaillancourt), who is a constant source of positive energy and amusement.

Screens are hung along the back of the stage and on the ceiling above the audience; an additional long screen faces the audience above the actors' heads. Caite Hevner's projections on these screens are wonderful, providing an extension of the story through visual effects: they fill the space with color, introduce character names, and orient us to the time period we are observing. Considering the almost two-hour run time (be warned: if you leave, you are not allowed back in), this production element is a welcome addition.

The "Masada today" sections of the show resonate as true and familiar; in fact, I have had similar discussions with Jews and non-Jews alike regarding the stereotypes of the Birthright experience. There are different types of programs to choose from, whether outdoorsy, religious, or political, as well as Israel's celebrated (and utilized) lower drinking age, and the soldiers, who are all thought to be trying to hook up with Americans. Beyond that, what Diaspora tries to do is explain conflict and connection, relating the present to a story from almost two thousand years ago. Despite understanding the perspective, I wonder how people who are not of the Jewish faith would react to what I think of as inside jokes. There is an educational aspect, particularly with the history, but it is somewhat confusing.

Certainly it is important to talk about Israel and the Middle East, especially as it is seen as a Holy Land for people of different faiths and levels of religious observance. Today we are still dealing with anti-Semites, racists, and a younger generation who could not care less about learning their own history, let alone the history of others. I appreciate what Diaspora is trying to do, but the drastic contrast between horny young adults and the somber subjects of war, treachery, and death might need some reworking. And some characters and storylines deserve more focus. For instance, Rachel's back story is quite compelling, but is only touched upon briefly. Also contributing to the confusion is an abrupt ending. Rather than just hearing these characters talk about what they are doing, I want to know how they feel about it. If Shapiro would only bring us into his world further, it would be more rewarding for all.