By Marichka and Mark Marczyk; Directed by Kevin Newbury 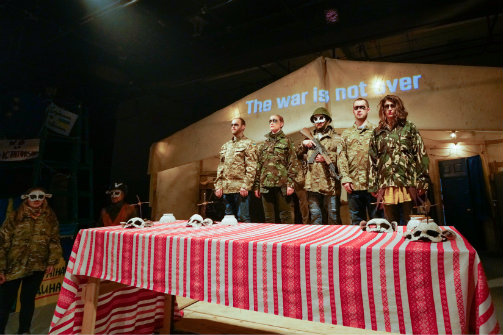 Many of the actors in Counting Sheep were themselves in Kyiv’s Maidan Square in November, 2013 when protesters—most of them university students—arrived to demand that Ukraine join the European Union. They were sick of then-President Viktor Yanukovych's corruption—at the time Yanukovych was living on a 140-acre ranch complete with an actual gold toilet—and fed up with his collusion with Russia. Over the course of the next few months, these activists took to the streets. At times the protests were celebrations—people shared stories, as well as food and drink, as they dreamed of increased opportunities and a liberalized social agenda. Some, including playwrights Mark and Marichka, met, fell in love, and, in short order, got married.

As you’d expect, the Ukrainian government was enraged by this seemingly spontaneous rebellion and by early 2014, sent gendarmes to disperse the barricaded crowds. Police officers in riot gear, with billy clubs and guns in hand, shot at random people and knocked others to the ground. By the end of the action, hundreds were dead, thousands were injured, and a huge cadre felt compelled to flee their homeland as political refugees.

Counting Sheep tells their story. The self-described “immersive guerrilla folk opera” is extremely effective. Thanks to video footage of the uprising that completely surrounds the audience, it is impossible to escape images of the rebellion. In fact, audience members are encouraged to get to their feet—moving from the bleachers or tables at which they are initially seated—and join the throngs of protesters rather than remain on the sidelines as spectators.

The cast—members of a Canadian band called the Lemon Bucket Orkestra—play a range of tunes from klezmer songs to mournful dirges, while several women and men with speaking parts supplement the projections. Throughout, fast-paced scrambling illustrates both police activity and protester response, keeping the audience on its guard, ever-vigilant.

What erupts is frequently chaotic, but that’s the point. Anyone who has ever been to a large-scale protest, whether the Women’s Marches of January 2017, a Black Lives Matter demo, or an Occupy Wall Street encampment, knows that within seconds, a protest can go from tranquil and peaceful to tumultuous. And the Euromaidan rebellion was no exception.

When the play begins, the audience is divided into three groups based on type of ticket. Those seated at the central tables are given food: Vereneke, hot borscht, a buckwheat dish called hrechka, and compote. Bleachers and wooden benches around the room's edges serve as seating for those holding less costly tickets. Once the play begins, however, the tables are dismantled and everyone—no matter how much they spent—is pulled up to dance and bear witness.

It’s an amazing experience. Thanks to the dramatic projected imagery, and the immersion into what is happening, the audience gets to briefly glimpse the highs and lows of political activism. Together with a roomful of strangers, we experience the joy that comes from collective solidarity and grieve the senseless government-sanctioned loss of life that took place. But we do more than simply mourn our dead Ukrainian comrades. We also lament the lack of democracy throughout the world, including in our own US of A, and are reminded that we have a responsibility to act if we want the world to be different.

The final footage offers a potent reminder that the revolution in Ukraine is not yet over. Neither, of course, is the resistance. Indeed, Counting Sheep reminds us that we are the change we’ve been waiting for. It's simply up to us to seize the challenge.

(Counting Sheep plays at 3LD, 80 Greenwich Street, through December 17, 2017. The running time is 70 minutes. Performances are Tuesdays at 8 through Fridays at 8; and Saturdays and Sundays at 3 and 8. There is no evening performance on Sunday 12/17. Note: People with mobility issues, or an inability to sit on, or get up from, the floor might find it difficult to attend this production.  Tickets are $49.50 to $69.50 and are available at countingsheeprevolution.com or by calling 800-838-3006.)