Off Off Broadway, Play with Movement
Runs through 1.15.17
Cherry Lane Theater, 38 Commerce Street 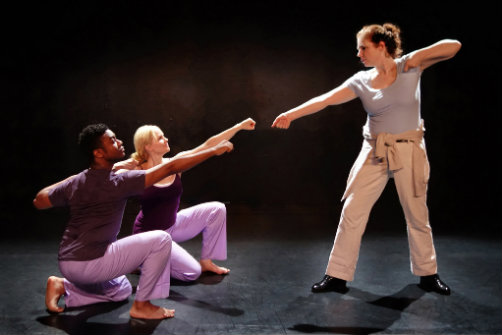 BOTTOM LINE: Told through a seamless combination of playwriting, dance, lighting, and sound, Carrying Helen shows us how people are brought together through simple acts of heroism.

Performed by three cast members, consisting of one actor (Marianne Hardart, also the playwright) and two dancers (Whitney Glandon and Brandon Richardson), Carrying Helen exists somewhere between the land of the one-woman show, narrative dance, documentary theater, and traditional theater, blending the mediums with amazing synergy to tell a simple, compelling story. Its action centers around a hospital administrator, Caralyn, who has volunteered as a “Superuser” for the approaching Hurricane Sandy. The Superuser’s job is to assist in evacuating hospitals in the event of a blackout by using a “Med-Sled,” a device for transporting immobile patients along with their equipment. Helen, a rambunctious older woman with an appealing Southern drawl, is pent up on the sixteenth floor of the unnamed hospital at the time of the storm. Though terrified and somewhat unprepared for the task, Caralyn is made the head of a team whose first assignment is transporting Helen to safety.

Though the two women and their particulars are works of fiction, Hardart’s portrayal of the pair brings them entirely to life. By the end of the show one feels that they’ve been through a great ordeal with these very real and vivid women. Through her specific physical choices and savvy writing, Hardart is able to depict full conversations between the two without missing a beat, often switching on a dime for a perfect comedic reaction or a magnetic moment of silent doubt. The performance is really something special, and it took reminding myself several times that I was actually witnessing the work of one actor in both of the roles. Hardart’s writing fleshes out the characters and deepens their journeys in excellent conjunction with her performance. The world is rich with specifics from Helen’s garden and Caralyn’s workplace, and several of these details make for excellent metaphors later on in the story: Helen loves plants first and foremost for their reliance on one another (the connections they make beneath the soil), just as she’s about to rely on a team of strangers to carry her to safety.

Though Hardart takes center-stage in the show’s storytelling, an even larger role is perhaps commanded by the two dancer/choreographers who fill out the world of the impending storm, the non-speaking characters, and the emotional undertones of the essential action. “Movement-based storytelling” is by no means easy. A lot of energy can be communicated through movement, but specifying that energy into messages can be much more of a challenge. Glandon, Richardson, and third choreographer Karine Plantadit, working in harmony with Elena Kritter’s directorial vision, overcome exactly that by creating a specific physical vocabulary, regular enough to create recognizable patterns, yet varied enough to remain visually engaging. The entire cast’s ability to time movement off of one another is amazing: often the music provides little or no rhythm to mark to, yet each piece is performed with total precision.

Given the play’s subject matter, one might expect it to follow a more typical structure of a protagonist struggling against obstacles to a specific end, but what Carrying Helen really offers is a story of two very different people being brought together in a time of need. Most of the action comes not from the actual crisis, but prior to it, when we meet two women who are essentially polar opposites, and the moment of highest stakes is arguably when they attempt to make a connection with one another, as Caralyn convinces Helen to be brought down. The play’s resolution comes not from the physical act of carrying but from its specific emotional impact on Caralyn. It’s a refreshing shift if you’ve recently seen one too many “well-made plays,” and if you’d like for a story that tracks a more internal journey, told through uncommon, but spectacular, means.

(Carrying Helen plays at the Cherry Lane Theater, 38 Commerce Street, through January 15, 2017. The running time is one hour with no intermission. Performances are Wednesday, Thursday and Friday at 7; Saturday at 3 and 7; and Sunday at 2. Tickets are $25 and are available at cherrylanetheatre.org.)

Carrying Helen is by Marianne Hardart. Directed by Elena Kritter. Choreography is by Karine Plantadit, Whitney B. Glandon, and Brandon Richardson. Lighting Design is by Derek Van Heel and Abigail Hoke-Brady. Sound Design is by Daniela Hart and Cody Hom. Music is by Joseph Giallombardo. Stage Manager is Casey Burden.