The Boy Who Danced On Air 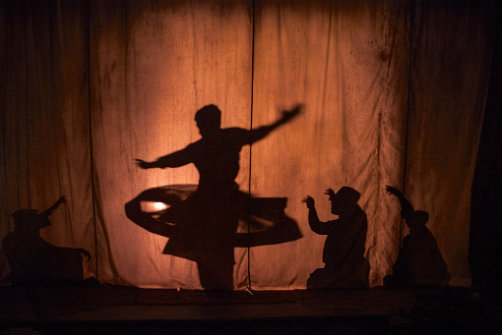 Troy Iwata and the cast of The Boy Who Danced On Air. Photo by Maria Baranova.

BOTTOM LINE: A magical production about dancing Afghan boys who fall in love while resisting their servitude.

The Boy Who Danced On Air explores the bacha bazi tradition in Afghanistan, where young boys from poorer families are sold to richer men to become dancers expected to give sexual favors to their male audiences. The show explains that because the Quran forbids both dishonorable relations with women and homosexuality, some (not all) Muslim men in Afghanistan believe that sleeping with a pre-pubescent boy allows a man to satisfy his “needs” without transgressing either restriction.

While this cultural context is important to understand those who support the bacha bazi tradition, The Boy Who Danced On Air also acknowledges the muddy waters this practice creates in terms of the boys’ personal agency and ability to consent. The opening number, reprised throughout, reminds us that our protagonist Paiman (Troy Iwata) is dancing for his master to “a song he never chose.” When Paiman meets another bacha baz, Feda (Nikhil Saboo), and the two fall in love, they begin to teach each other what it really means to be in control of one’s life as they attempt to overcome their circumstances.

The story and staging evoke aspects of Slumdog Millionaire, Romeo and Juliet, and even classic Disney musicals. And yet, this insight into a largely unknown facet of Afghan culture offers an utterly unique storytelling experience. While the book gets a bit muddled, particularly in Act 2, I found myself moved by Paiman’s plight and interested in the moral complexity of the entire show. It’s refreshing to see a new musical grapple with multi-layered conflicts while exposing New York audiences to parts of the human experience we haven’t seen before.

Another major highlight of the production is the gorgeous music by the Jonathan Larson award-winning team of Tim Rosser and Charlie Sohne. The score borrows heavily from classic American musical styles—with soaring melodies perfectly suited for an underdog/coming of age/love story—with just enough Afghan percussion and ornamentation to transport us out of NYC and across the globe. It also helps that the score is executed by such gifted singers: Jonathan Raviv’s clear tenor and rich baritone notes mirror bacha baz master Jahandar’s conflicted moral existence with impeccable musical skill. And Iwata and Saboo, the two young men playing the bacha bazi, blend beautifully together in their romantic duets.

In addition, the set and lighting designs play beautifully against each other to transport us to Afghanistan. Identical twin brother designers Christopher and Justin Swader have crafted a set that seamlessly transforms from lush Afghan parties to ancient cityscapes in ruins by simply moving a curtain or adjusting a light cue. And there’s a sense of magic in the air from the moment you walk into the theatre, with vibrant fabrics and rugs about the space, and strings of colorful lights hanging above the audience, inviting us into the party. In both the Swaders’ set and Wen-Ling Liao’s lighting, essentialism is the key: a thin strip of rocky soil at the foot of the stage conveys Afghanistan’s rocky terrain, while a slowly-spinning fan casting a shadow across an Afghan home conveys the region’s oppressive heat.

In spite of its morally complex subject matter, The Boy Who Danced On Air offers a story of hope and love prevailing in the face of systemic oppression. Abingdon Theatre Company’s production offers an escape to a world we often don’t get to experience as New Yorkers, but simultaneously reminds us of our universal needs for love, acceptance, understanding, and autonomy.