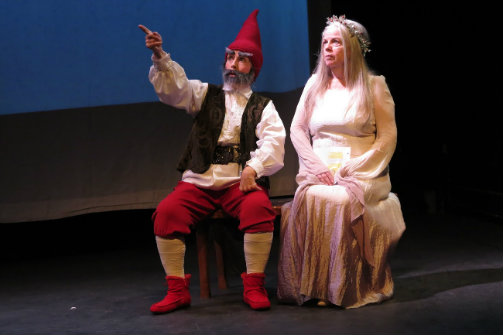 Pilar Garcia and Mary Tierney in The Black Glove. Photo by Jonathan Slaff.

August Strindberg was a theatrical innovator who helped pioneer the concept of theatrical naturalism, experimented with dramatic form, and created plays with complex characters which are performed around the world to this day. He also was a misogynist who at one point wrote, ''Woman, being small and foolish and therefore evil…should be suppressed, like barbarians and thieves. She is useful only as ovary and womb.” So it’s a shock to learn that this brooding, unpleasant genius wrote a series of children’s plays, including the rueful Christmas-themed The Black Glove, now in performance by the Strindberg Rep.

First performed in 1911, The Black Glove tells the story of how various tenants in an apartment building find their lives unexpectedly intertwined one Christmas, thanks in part to a mysterious black glove that keeps re-appearing in odd places. The glove’s travels are orchestrated by Tomte (Pilar Garcia), an orderly yet mischievous house-elf, and the beneficent Christmas Angel (Mary Tierney). In addition to making mischief with the glove, the Christmas Angel persuades Tomte to help her teach the Wife (Amber Jean Crawford) a lesson, because though she is beautiful, she is hard-hearted, and must suffer to become a better person. (This is a Strindberg play, after all). So, Tomte kidnaps the Wife’s daughter (spoiler alert: the child is returned safe and sound on Christmas day) and the entire building is swept up in the search to find her. In a subplot, Tomte helps a lonely old Professor (Jo Vetter) overcome suicidal thoughts to realize the true meaning of life isn’t found in his volumes of yellowing old books.

Director Robert Greer has cast the play with all women actors. Having them play male characters echoes the travesti tradition of the late 1800s and early 1900s, in which female actors assayed male roles, such as Sarah Bernhardt’s famous performances of Hamlet. It helps mitigate the vestiges of Strindberg’s misogyny, for though The Black Glove is a Christmas play with a happy ending, it’s still a play where a "bad" woman must be taught a lesson. This cross-gender casting also gives the magnificent cast a chance to show their range. Pilar Garcia shines as Tomte. Hopping, crouching, and shaking with delight, she is a believable otherworldly creature who never veers into cutesy cliché. Jo Vetter brings an air of bewildered heartbreak to the Professor, and Diane Perell makes a kindly, worldly-wise Caretaker. Crawford strikes the right note of wounded hauteur as the Wife, while Mary Tierney captures the solemn majesty of the Christmas Angel. Crystal Edn finds the depths of anger and despair in the Wife's maid Ellen, who is wrongly accused of stealing a ring, while Amy Fulgham has fun interacting with the audience as Kristin, another household maid.

Anne-Charlotte Harvey’s translation of this rarely-produced work is written in eloquent, conversational style. It alternates, as Strindberg’s original language does, between prose and rhyming verse. It captures the play’s many moods, which shift from Tomte's joyful glee in picking out a Christmas card for the Wife, to the somber musings of the Professor as he contemplates his loneliness.

The design is sparse yet evocative of early twentieth-century Sweden. Janet Mervin’s costumes are a marvel of period detail and whimsy (especially the Tomte’s red cap, pantaloons, and boots). Illustrator Donna Miskend has provided vivid, colorful drawings of the apartment building’s interiors, but their projection on a large pull-down screen looks unintentionally awkward in the tiny black box space.

Though the play has its dark moments, nothing is ever too scary or explicit, and the Strindberg Rep recommends it for children ages 8 and up. On the night I saw it, two children sat in rapt attention throughout, though their focus was challenged by the long conversation about the meaning of life between Tomte and the Professor. The theatre also provides free cookies before and after the show, and Tomte cheerily wishes audience members a happy holiday as they leave.

In all, The Black Glove is a poetic, whimsical holiday play that is a must for Strindberg junkies, and anyone looking for holiday fare that isn’t A Christmas Carol.

(The Black Glove plays at Gene Frankel Theatre, 24 Bond Street, through December 16, 2017. The running time is 95 minutes with no intermission. Performances are Wednesdays through Fridays at 7, Saturdays at 2 and 7, and Sundays at 2 and 5. Tickets are $29. Special pricing (and front row seating): $49 for one parent and child; $59 for one parent and two children; $69 for two parents and two children. Tickets are available at SmartTix.com or by calling 212-868-4444. For more information, visit strindbergrep.com and genefrankeltheatre.com.)