The show is now closed.

A Brimful of Asha

Written and Directed by Ravi Jain
Produced by Soulpepper
Presented in association with Why Not Theatre, in collaboration with Richard Jordan Productions 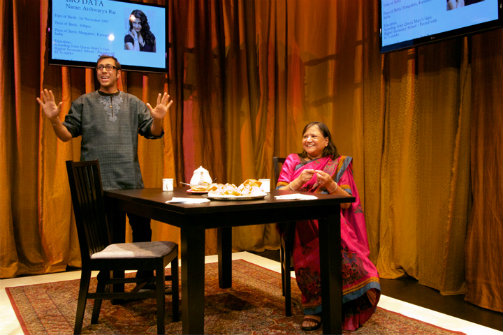 Ravi Jain and Asha Jain in A Brimful of Asha. Photo by Cylla von Tiedemann.

BOTTOM LINE: Ravi Jain and his mother Asha explore familial bonds, arranged marriage and a pursuit across India in this winning comedy.

You know you’re in for an unusual theatre experience when the performers greet the audience before they enter, offering a pre-show snack of samosas and tea. But then, this is A Brimful of Asha, one of the Canadian imports brought to New York as part of the month-long residency for Toronto-based company Soulpepper.

Ravi Jain, a Soulpepper Resident Artist, and his mother Asha Jain, a non-actor, present the story of his Indian-born parents’ dogged attempt to marry off their youngest son in 2007. The two, dressed in culturally specific clothes, sit at a large table and Jain explains, "My mother and I are going to have a conversation. I’m going to tell you about something that happened to me." Asha interjects, saying, "It happened to me too so I’m going to start," giving a sense of the sometimes playful, sometimes stubborn, awkward and heated dynamic between the two. She goes on to add, "I'm not an actor. I’m an abused housewife. This Canadian will twist the story. I’ll point out when he does."

Twenty-something Ravi has just gotten back from Paris and is about to start a theatre company. "What a proud profession for Indian parents," Asha chimes in. Ravi’s folks are anxious to see him wed and he has agreed to let them introduce him to women. The story gets going when his father tells him to send his résumé for a job with a theatre project in Delhi, where his father has just taken a trip. It’s a ruse, of course, and "the theatre company was never mentioned again." But his father has come back with bio data on several women, which Jain explains using a made-up profile of stunning Bollywood superstar Aishwarya Rai. "If you guys had shown me hers, we would have been set," he cracks. He compares the bio data approach to how people meet on Facebook.

Ravi emails a woman his father has selected whom his family knows. Asha asks him every day about their communications and when he tells her it's none of her business she says, "You should have just cc'd me on the emails." He heads to India for a trip with one of his friends and plans to get together with his potential bride along the way. Much to his surprise his parents announce that they will be making a special trip to India as well. Naturally, hijinks ensue, with unexpected visits to the prospective in-laws, a huge fight with his parents and another fix-up.

In the middle of recounting his travels, with his parents in hot pursuit, Jain has his mother share how his parents met. She was in her early twenties and had just received a Masters degree when her mother put a stop to any further education. Asha, who had no interest in getting married then, had dreamt of opening up a school so that she would be able to take care of her grandparents and her polio-stricken youngest brother. But she agreed to marry someone living abroad and within two months of meeting her future husband, she was married and living in Canada. It's a moving moment, hearing what Asha gave up, and explains some of why she feels it's her duty to pick a wife for her son.

As with many mothers and sons, it's clear that there's a lot of love and affection between Asha and Ravi. It's also a complex relationship that the two have decided to invite strangers to witness, with the good, bad and the ugly exposed. Asha isn't a born performer, but she is funny and ultimately has the audience in the palm of her hand, even when she’s being argumentative and intrusive. Jain is a skilled storyteller and deserves props as a writer who has crafted a show that forces him to work alongside his petite but fearsome mother...or his "employee," as he jokes during the show. A couple of small cuts could be made early to get the family to India sooner without any of the set up of their relationship being sacrificed.

I caught the last performance of the show, but hopefully New York audiences will get to see a return engagement. A Brimful of Asha is a charming production with an unlikely comedic duo that also provides a window into the subject of arranged marriage that many people know nothing about. It's a welcome introduction to another culture.

A Brimful of Asha was written and directed by Ravi Jain. Set and Costume Design by Julie Fox. Video and Lighting Design by Beth Kates. Production Stage Manager was André Du Toit.

The cast was Ravi Jain and Asha Jain.