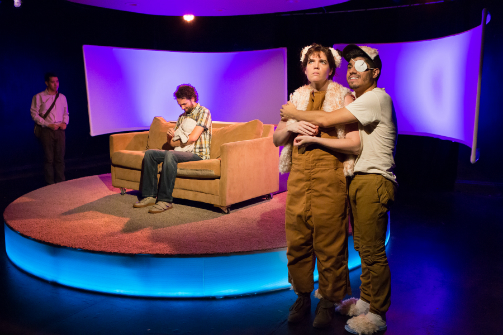 Dan Giles must be in therapy. A couple, Mikey (Alton Alburo) and Dean (Jacob Perkins), are adopting a baby. They are days away, in fact, and they have all the survivable kinks of a relationship in the gay digital age. Like a certain proclivity to the accessibility of sex through an app. It’s not quite about that though — thankfully, it's deeper. And Neil Patrick Harris does not come out well by the end of their fights. But it’s Jason and Tyson, our other couple, played deliciously by Fernando Gonzalez and Lea McKenna-Garcia, who deliver us a line straight from the therapist’s couch: after a fight, Jason says with trademark cadence, “When you say that it makes me feel...” You see, Jason has just discovered sex, and it’s great. He wants to do it all the time. Oh yeah, and did I mention that Jason and Tyson are hamsters?

Jason and Tyson seem to be the trial run for Mikey and Dean’s child—they're prominently featured in a cage behind the (human) couple's sofa on Brian Dudliewicz’s simple, circular set-with-surprises. Jaki Bradley’s smooth direction rotates the sofa to reveal the inside of the cage where the hamsters come to life. McKenna-Garcia’s brilliantly deadpan Tyson is the perfect straight man to Gonzalez’s boisterous, endearing Jason, who exudes just a hint of hamster à la Bojack Horseman.

Where Mikey and Dean can’t have children and must adopt, Jason and Tyson have plenty of “pups” all too easily. Jason is thrilled; Tyson predicts she’ll eat them. Their conflict becomes physical, causing a clawed-out eyeball and eventually worse. Conflict ensues in the human world as well, when Dean is caught with a random dude (played in masc-for-masc glory by Gonzalez, who has entered the human world in an expertly delightful transformation). I won’t reveal the specific act here, but it’s safe to say it is the most graphic depiction of it that I’ve seen live. This audience squirmed as it just got worse—or more intense, if we want to be less fetish-shaming.

It takes a lot to shock me, and shock me Breeders did, on more than one occasion. Bradley’s direction does not shy away from these moments, allowing them the space they need to be fully understood. Thankfully she has some brave performers willing to take the risk. And this shock you might not see coming. Giles’ play is smart. He doesn’t show all of his cards until the moment is right. I was worried by the triteness of the first moments—the trope of the young gay couple, adopting kids and miscommunicating about Grindr (or Prowlr here), is getting tired. Much like Bradley’s direction, Giles turns the tables in Breeders to reveal a deeper, more disturbing core at the center. And when he does, it makes me feel…

This team, and this play, is well worth your time. Check it out.

(Breeders plays at Access Theater, 380 Broadway, through October 14, 2017. Performances are Wednesdays through Fridays at 8; Saturdays at 3 and 8; and Sundays at 7. Tickets are $25. More information and tickets available at newlighttheaterproject.com.)