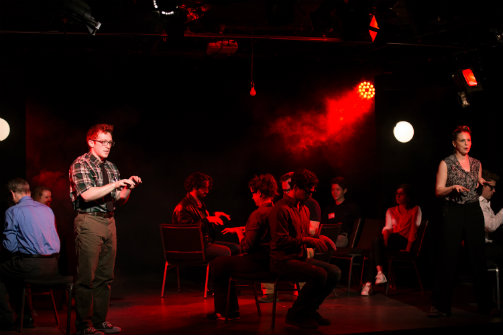 Ethan Slater and Larisa Oleynik with the cast of Baghdaddy. Photo by Ambe Williams.

It’s amazing how 100 days can make us miss the era of President George W. Bush. The re-titled production of the 2015 musical Who's Your Baghdaddy? relies on the nostalgia of a previous, less bad, political regime. What was once shocking and unbelievable (a war we started for no reason) now reads as a quaint problem in Donald Trump’s America. Isn’t it hilarious that the Department of State had no idea what they were doing? (We wouldn’t know what that’s like.)

Directed by the composer/book writer Marshall Pailet, with lyrics and book by A.D. Penedo, Baghdaddy is based on a screenplay by J.T. Allen. Each character tells their own version of how the Iraq War started. A very junior German intelligence officer who happens to speak Arabic ends up face to face with an Iraqi who well…you can guess how it goes from there.

One of the crucial issues with Baghdaddy is the tone. It’s framed as a slightly somber support group as the characters go around the room and confess that they started the Iraq War. Quickly, the energy ricochets up to an unyieldingly high level throughout the entire show. It is nearly impossible to address the darkness and gravity of the Iraq War when your actors are bouncing off the ceilings. There are moments that address the heaviness of the story, but overall Baghdaddy makes light of political incompetence. Maybe the show played better in 2015 during an Obama presidency, but it’s hard to laugh at how messed up our government is—or was—when our White House proves their incompetence daily.

The actors (many of whom are returning from the 2015 production) all give committed performances, but there is very little space for complex characters. Larisa Oleynik, in particular, is a real standout with her strong performance as CIA analyst Berry. The show is cleverly directed by Pailet, and brings a real downtown sense of inventiveness to make the musical work in a small space. The choreography by Misha Shields is a real highlight, as is the creative lighting design by Jennifer Schriever.

But while I kept searching for unity in the music and book to explain why this story is a musical, I never found it. It’s an interesting story, to be sure, but it may have been better served as a play without music. The songs lack a distinct voice and often blend together. Whenever the show seems to gain steam in a book scene outlining the plot, the action veers back towards a song that is simply a distraction. The songs serve as opportunities for jokes and do nothing to propel the plot. Additionally, many of the running jokes are culturally insensitive, and that’s honestly the last thing we need right now.

Musicals can and should tackle dark subject matters. I admire what the writers of Baghdaddy are going for, but there is no clear takeaway message or point. The piece feels like it’s just a reminder of “don’t forget this horribly stupid thing we did,” which isn’t far away enough from what is still happening every day.

Baghdaddy has music and a book by Marshall Pailet, and lyrics and book by A.D. Penedo. Based on a Screenplay by J.T. Allen. Directed by Marshall Pailet. Choreography is by Misha Shields. Set Design is by Caite Hevner. Lighting Design is by Jennifer Schriever. Costume Design is by Summer Lee Jack. Orchestrations are by Charlie Rosen.  Music Director is Rona Siddiqui. Stage Manager is Courtney Lynn Leggett.