For other shows at BAM's Next Wave festival, visit bam.org

A Billion Nights on Earth

By Thaddeus Phillips; In Collaboration with Steven Dufala
Part of BAM's 2017 Next Wave Festival 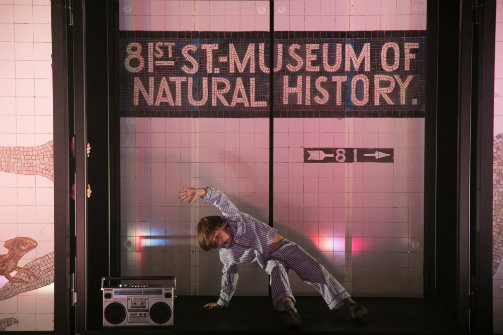 Winslow Fegley in A Billion Nights on Earth. Photo by Max Gordon.

BOTTOM LINE: Father and son go on an odyssey in all the most magical dimensions across time and space in search of a lost toy.

In E. O. Plauen’s cartoon series Father and Son (1934 - 1937), a plump, balding father and his precocious, typically naughty son get into various fantastic situations as well as everyday troubles. The timeless and heartwarming premise is reflected in Thaddeus Phillips’ whimsical and wondrous play A Billion Nights on Earth, where a little boy’s persistent search for a missing toy, as well as the power of familial love, takes the audience through time and space.

You first see an attic window that looks like the cover page of a bedtime storybook: it's a window that is a portal to infinite universes. And inside that window, a child (Winslow Fegley) answers his father (Michael Fegley), who is calling for him to go to bed: “But the rocket’s about to launch!” In a scene likely recognizable to any parent (or child), Michael, the architect father, is ready to dive into his work with blueprints and paper models; some goofy mild jazz plays as he microwaves his coffee. Before he gets to take one single sip, he hears the electric music from his son's room and lets out a sigh. Winslow refuses to go to sleep without his favorite stuffed whale, which is missing.

This sequence repeats: the father prepares his workstation, microwaves his coffee, never gets to drink it and goes upstairs to tuck his child in bed over and over. Until finally, there seems to be a ceasefire: Winslow asks for some milk and goes to get it himself. However, when he opens the refrigerator door, Winslow discovers a portal to a different dimension, like the other side of Narnia’s wardrobe. He steps in and ends up in a snow-clad, impossible world. And like Gulliver in Brobdingnag, he finds everything around him to have suddenly grown in size. So the boy hoists up a backpack made of a Chinese takeout box and braves the unknown across an ocean of creamy milk.

Michael soon follows, because like any father, he’d follow his son to the end of the world. Except in this imaginary dimension, the adult's logical mind is far less adept than that of the child, who has accepted how in fairy tales, a nutshell can easily be a boat. And thus we witness Winslow’s excellent survival instinct: building a fire and playing music with magical singing firewood, while the father is startled by a curious penguin and the general irregularity of the whole situation.

The search for the missing whale continues, a journey that brings the father and son closer together. In a state of half dream, half fascination, they observe the entire history of humanity. Before their eyes float the pyramids of ancient Egypt, the melodies from Assyrian instruments, castles from medieval times, the curved roofs on a Chinese tower, all the way to the modern cacophony of the city they live in, and finally, they hear their own conversation the night before: the father telling the son to go to bed, and the son eagerly awaiting a rocket launch.

The brightly colored designs, exaggerated and comical executions, as well as the poetic storytelling, all make the aesthetic somewhere between Le Petite Prince and Adventure Time—something that is seemingly made for young audiences, but that reveals important hidden layers for adults.

The production does not forget to poke fun at the MTA either. As the pair (the actors are also father and son in real life) reach the 81st Street stop after dodging spontaneous express lines and other typical problems, local audience members will smile with recognition at the dinosaur mosaics at the train station, complete with Er Hu music from somewhere on the platform. The son teaches the father a few break dance moves, and the father admits that his inspiration has been beaten out of him by reality years ago.

With elements of Kabuki theater, pop-up book design, and a copious amount of giant balloons, Thaddeus and Steven Dufala have made a brilliant dreamscape for children and adults alike. It’s a perfect remedy for anyone who maintains a soft spot for fantasy that’s deeply rooted in humanity, and has not lost a sense of childlike wonder. In the end, this tender and extraordinary fable about love, and the importance of nurturing our own curiosity, boils down to the immeasurable love between a father and a son, and how they manage to understand, and live in, each other’s world. A coloring book comes with the performance as a parting gift, and I cannot think of anything more fitting.

(A Billion Nights on Earth played at BAM Fisher, 321 Ashland Place, through November 18, 2017. The running time was 55 minutes with no intermission. For more information visit bam.org.)

The cast is Michael and Winslow Fegley.