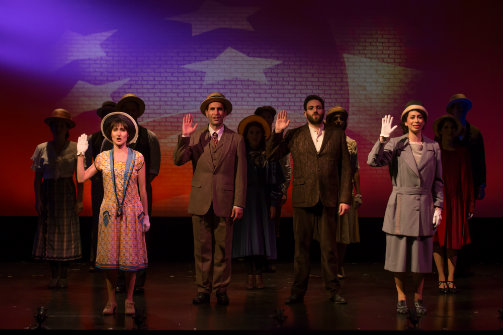 BOTTOM LINE: An entertaining, moving, and nostalgic tri-lingual musical about Jewish life in the US, from the 1890s through World War II.

Between the 1880s and the start of World War I, approximately two million Eastern European Jews emigrated to the United States. Most were poor, and all were desperate. Thanks to a spate of anti-Semitic pogroms following the 1881 assassination of Czar Alexander, working-class Jews fled their homelands for the perceived safety of distant shores. As they saw it, the United States was the goldene medine, the golden land, a place where they would be able to live in peace, freedom, and prosperity.

Ellis Island processed them. The lucky ones were marked with an ‘H,’ indicating good health, and were allowed to enter. The tubercular wore a ‘T,’ those with eye disease, an ‘E.’ Illness meant deportation, and families were ripped apart. For far too many entrants, this bittersweet beginning was a harbinger of future difficulties. Indeed, they quickly discovered that money did not hang from trees; neither were the streets lined with gold. Instead, the majority of newcomers settled on New York City’s Lower East Side where they found low-paid jobs in the garment industry or became street peddlers. Securing housing was a constant struggle: most ended up in dank, overcrowded tenements.

Their stories—told in Yiddish with Russian and English subtitles—are woven together in Amerike—The Golden Land, a 33-year-old, oft-revived and oft-updated musical that pays homage to both the epic struggles and assimilationist success of this subset of American Jews. All told it’s a rousing, if episodic, look back.

That said, this is not a history lesson, and there is not much of a narrative thread holding the 41 song and dance numbers together. Yes, there’s mention of displacement, culture shock, and the inevitable adjustment to a new land and new customs. There’s mention of language difficulties and limited job opportunities. But there’s also a lot of kvelling (pride in acknowledging achievements). Indeed, Amerike celebrates a multitude of community accomplishments. Yiddish theater, film, and radio are honored, with radio station WEVD getting special mention. Several on-air skits, presumably mimicking actual broadcasts (think Grand Ole Opry in Yiddish) offer a hilarious window into the past.

There’s also a sprinkling of politics. Sweatshops are denounced and a powerful rendition of the song "Bread and Roses" is sung in tribute to the 146 young women who died in the Triangle Shirtwaist Factory fire of 1911. Similarly, the Great Depression is introduced through Yip Harburg’s "Brother, Can You Spare a Dime?" But it’s the final song, "Give Me Your Tired Your Poor," Irving Berlin’s musicalization of Emma Lazarus’ 1883 poem for the Statue of Liberty, that packs the biggest punch, reminding contemporary audiences that millions of people remain homeless, tempest-tossed, and in need of refuge.

As the cast sings Berlin’s haunting tune, a projection of Lazarus’ appeal is visible in Arabic, Chinese, English, French, Italian, Russian, Spanish, and Yiddish. Lest we forget, it suggests, America’s reputation as a haven for those seeking religious and political freedom can be easily eroded. It’s up to us to make sure that this does not happen.

In addition to the production, NYTF is hosting an Immigration Arts Summit on July 17 and 18. A keynote address by comedian John Leguizamo and presentations by Larry Kirwan, Jenny Romaine, Nina Lam, Morris Vogel, and Sabrina Zuo are scheduled. For tickets or more information, go to nytf.org.