Off Broadway, Play
Extended through 7.1.18
The Loft at the Davenport Theatre, 354 West 45th Street 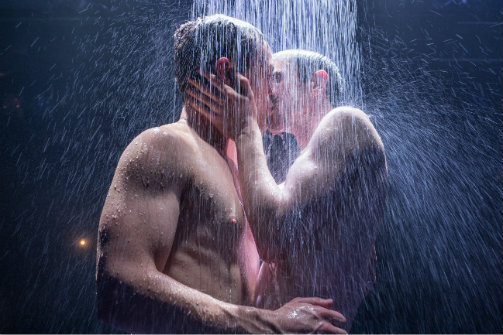 Open relationships are hardly a new thing, especially among gay men, but they are certainly talked about more now, especially in mixed company. Whether polyamory itself is actually on the rise is more difficult to say, but the potential trickiness that comes with opening one’s heart to more than just one person makes the subject a natural fit for dramatic conflict. Witness writer-director-producer S. Asher Gelman’s Afterglow, a frank exploration of what happens when one half of a married couple makes a new “friend.”

Afterglow opens with an orgasm, or from the sounds of it, three of them. As the moaning starts to wane, the sheets around the central platform fly away to reveal three naked men. Married couple Josh (Brandon Haagenson) and Alex (Robbie Simpson) have brought Darius (Patrick Reilly) home for some fun. In the afterglow, as Alex is showering, Josh and Darius make their own plans for a repeat encounter the next day. But it’s no secret; Josh and Alex are “open,” and their only rule is “no sleepovers.”

And sure enough, Darius has Josh over for some steamy shower sex; the shower, part of Ann Beyersdorfer’s clever set, is also then enjoyed by Darius and Alex, after Darius, a massage therapist, gives Alex a complimentary session. But while Alex is the one studying chemistry in grad school, the real chemistry is between Darius and Josh, who start spending more and more time together, with, at least at first, Alex’s blessing. Of course, things won’t stay so rosy forever, and it is soon pretty clear, to us if not to the characters, where this is all going.

Certainly Gelman has staged the play well, aided by Beyersdorfer’s smartly designed blocks and padded platforms. Rather than rushing through the transitions, he chooses to take his time, filling them with silent beats between the characters to help tell the story. And the design is first-rate: in addition to the working shower, there is Jamie Roderick’s inventive lighting design, with a web of string lights across the ceiling, individual light bulbs around the perimeter, and fluorescents within the deck. Fabian Aguilar’s costumes are spot-on, capturing the studied indifference of the Hell’s Kitchen in-crowd, down to the requisite 2(X)ist underwear. And Alex Dietz-Kest’s detailed sound design is understated but effective, using Sigur Rós tunes for transitions and the occasional pop song when necessary, like when Darius folds laundry to Jess Glynne (a refreshing moment of joy in an otherwise dour second act).

But the music isn’t the only thing here that’s all white. Given the extensive nudity required of all three actors (if you’re looking for penis, you’ve come to the right place), I can understand why the potential casting pool might be comparatively small. But unfortunately, we end up with three people who are all kind of the same: thin, generically attractive white gay men in their mid to late 20s. Indeed, the character development all but stops with their professions and their roles in the love triangle; the cast members of Logo’s Fire Island have more complexity. Certainly the actors do what they can to add dimension: Reilly, with his combination of vulnerability and self-confidence, perhaps shines the best as Darius; Haagenson, as the man in love with two people, manages to be both charming and sincere even as he plays both sides; and Simpson does well at making us understand Alex’s conflicted needs. If at times the actors veer too quickly into heightened emotion, this is largely the result of Gelman’s script, which relies on long-simmering tension and potentially deep-seated issues that we never really see first-hand.

But there are worse problems. Josh is a theater director and Alex is a grad student, yet they’re somehow having a baby through surrogacy (they call the fetus things like “lemon” and “apple,” based on its size, something that is either endearing, grating, or creepy). I spent the entire play wondering how on earth two barely employed men who are not yet 30 could afford a surrogate pregnancy, only to find out from the descriptions in the script that Josh apparently “comes from wealth.” But aside from one cryptic line in the spoken text, this goes completely unaddressed. Darius actually has to work to pay his rent, but how many 25-year-old massage therapists can live alone in Manhattan on only a few clients a day? The insularity and entitlement of all this is not only astonishingly tone-deaf, given contemporary conversations about privilege, but also makes for a weaker play, since these characters only have one issue they’re dealing with, one that, frankly, will seem comparatively insignificant to anyone who doesn’t “come from wealth.” And while Gelman likely added the surrogacy to raise the dramatic stakes for this couple, his treatment of it ultimately serves to emphasize just how selfish these characters are.

At the very least, one might hope for a fresh take on open relationships, but even here, Afterglow disappoints. Gelman wrote the play based on his own experience of “having a boyfriend in addition to” his husband Mati, and Josh is clearly a stand-in for Gelman. To Gelman’s credit, there is really no villain in this piece, no clear “bad guy” to telegraph to the audience who will wind up together. Yet while it’s understandable why Afterglow hews so close to Gelman’s own life (spoiler—things didn’t end well), this results in something we’ve seen countless times before. As Josh says, “no one wrote a fairy tale about polyamory.” But it’s a shame—if Afterglow has the potential to be this fairy tale, none of the characters has the necessary imagination. All the talk about open relationships notwithstanding, these guys’ only conceivable model for romantic love seems to be just two people. Indeed, after that first sex scene, we almost never see the three guys together; one can’t help but wonder what would have happened if we had.

(Afterglow plays at The Loft at the Davenport Theatre, 354 West 45th Street, through July 1, 2018. Running time was originally 2 hours 15 minutes, with one intermission. Running time is now 90 minutes, no intermission. Performances are Mondays through Wednesdays at 7:30; Thursdays and Fridays at 8; Saturdays at 2 and 8. Tickets are $66.50; $86.50 premium, and are available on telecharge.com. For more information visit afterglowtheplay.com.)

The cast is Brandon Haagenson, Patrick Reilly, and Robbie Simpson.