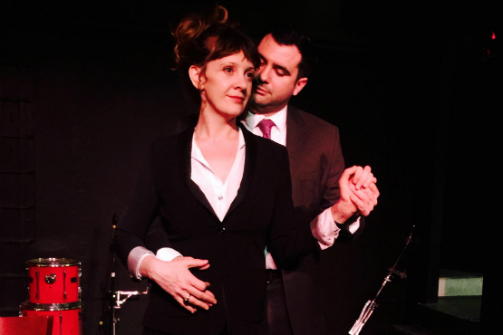 Eric Doviak and Stacey Roca in yeah, i met this girl..., photo by Antony Raymond.

BOTTOM LINE: A funny and thought-provoking dissection of the man/woman mating dance that doesn’t entirely come together.

The dating habits of Millenials in New York are a subject ripe for humor and scrutiny. Raymond examines this microcosm through a trio of men and the women who appear and disappear from their lives, with James Joyce’s Ulysses as a backdrop.

There’s Guy (Dan McVey), who runs his late father’s bar/restaurant. He’s interested in a musician (Zina Wilde), who, like the rest of the women (or “girls” as they’re referred to in the program) playing multiple roles, are never named. She thinks guys who cry at the end of movies are weird. Guy, of course, always cries. He offers her wine and says, “you say no to wine, you say no to life.” Guy seems to be a bit of a romantic.

Ben (Eric Doviak) is more of a smooth operator, as evidenced by his pick up scene. He’s a guy who breaks up with a woman via voicemail and texts her to tell her to check her voicemail. Ben pursues a woman (Stacey Roca) at the bar with deliberately terrible lines. He asks what she’s reading and remarks on how annoying it is when people do that. They talk about Ulysses, which she’s reading and Ben has, to her surprise, read. He asks if she’s waiting for friends and when she says yes, sits down. Ben was steadily winning me over, a testament to Doviak’s talents and Raymond’s writing of a character that could have easily been a lot more one note.

Joe (Christopher Heard) is hot for the new waitress (Amanda Kristin Nichols) at Guy’s bar. He’s the unintentional comic relief and early on, comes across as a bit of a doofus, getting lines like, “But I digest” when he means digress. He and Nichols (playing a different woman) are a couple discussing Ulysses, which she has just finished. She doesn’t want to spoil the ending but he could not be less interested. The writing is on the wall for these two as she recounts putting on make-up while naked and Joe hadn’t even looked up.

In between hook ups, Guy, Ben and Joe convene over drinks at the bar. They share their struggles and their victories although moments of true vulnerability are of course more fleeting. It’s where they seek safety while waiting out Hurricane Sandy and chatting up women. For Guy, it’s his lodestar and really a home for all three.

My favorite vignette, apparently inspired by the “Ithica episode” of Ulysses, which was written entirely in questions and answers, is one in which Ben and a woman (Nichols) go from an online date to a relationship to a hostile break up, as the breezy early parrying builds to something more meaningful before crashing and burning. It’s effectively written and staged by Raymond without turning cutesy or gimmicky.

Admittedly, I’ve never read Ulysses and hats off to Raymond for doing so. Regardless, it’s unclear to me whether Raymond is using the novel as inspiration to try to say something profound or more to illustrate and satirize the 11th circle of Hell that is the dating realm of New York 20 and 30-somethings. If it’s the latter, then it succeeds more than if the former was his intent.

That being said, not all of the characters and their plights are given equal weight. With Ben, Raymond has created someone who could have been really unlikable, but instead is a charming heartbreaker. Joe and Guy, on the other hand, are less developed. Joe, who starts off the most lightweight of the three, gains depth as he falls in love and is then hit by tragedy. He has a particularly moving scene at the end as he opens up while “Smoke Gets In Your Eyes” and “Darling You Send Me” play. Heard handles the comedy and gravity deftly. Guy is largely limited to pining for a woman and then after getting a girlfriend, becoming preoccupied with her suddenly ghosting him. But McVey brings a sweetness and relatability to the “nice guy” who wants the real thing the most. Even though the women float in and out of the men’s lives and at times are even interchangeable as they pass from one to the other, Wilde, Roca and Nichols provide solid counterpoint to the men. They bring sexiness, intelligence, wit and pathos to their varied roles.

Although the play doesn’t hit all the marks, it’s a smart and lively exploration on the subject of relationships, a topic that will never run out of mileage. It also features a great soundtrack including Jimmy Soul, Electric Light Orchestra, David Bowie and The Romantics. Fittingly, in a show about bros and all their flaws and triumphs, it circles back to the bar in the final scene as “Just Waiting for a Friend” plays.

(yeah, i met this girl… plays at UNDER St. Marks through February 14, 2016. The show runs approximately 90 minutes with no intermission. Performances are Fridays and Saturdays at 8 and Sundays at 2. Tickets are $25 and available by visiting elsinorecounty.com.)

yeah, i met this girl… is written and directed by Antony Raymond. It is presented by Elsinore County Theater Company. Lighting design is by Daryl Embry. Sound design is by Deen Anthony. Set design is by Paulo Maldini. Costume design is by Fabio Cannavaro. Roberto Baggio is the Stage Manager.