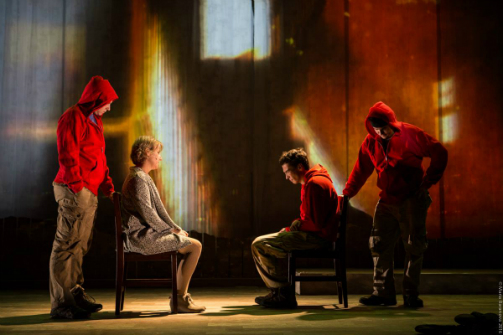 The cast of Wilderness.

Wilderness takes documentary theater to a new level. Video testimonials (conducted over Skype with writers Anne Hamburger and Seth Bockley), audio recordings, and literal transcript dialogue are here played alongside stories inspired by the young people who have gone through strenuous therapy subjecting them to the elements. Welker White, as a kind of everyman-mom, engages with the real-life video and audio seamlessly, playing one part parent, one part researcher, and multiple levels of empathy. The effect of the interviews, conducted long after the therapy has ended, is one of emotional distance when placed next to imagined stories on stage. This tenuous parent/child relationship becomes the most interesting focus of Wilderness.

Where I struggle with the show is its overwhelming sense of sentiment, welled up in stories told again and again about the difficulties of adolescence—sexuality, gender identity, distorted body image, and drug abuse to name a few. There isn't much new here. The play never becomes more than a static after-school special of the 90s. The performances themselves also feel forced and not fully lived in, unsupported by the movement of Devon de Mayo and Patrick McCollum. It’s a bizarre intersection of realism and Fosse-style choreography, with a row of chairs in dim light that can only make me think "pop, six, squish, uh uh…" Director Bockley places this collage together as best as he can, though the performances can never recover from their moments of forced sweater-on-chair ballet. I craved more time with each scene, allowing us to understand and explore each moment with nuance rather than melodrama and interpretative dance.

Wilderness does succeed tremendously with a well-structured design, with projections by Michael Tutaj on the deceptively simple canvas of Carolyn Mraz’s perfect scenic design. Claudia Brown’s costumes are fitting and expertly track us through moments where students take turns in an adult wilderness guide role.

Audiences who will take away something from Wilderness are parents who can no doubt identify with the kind of pleas of those who are out of options with a struggling teenager. Oh to be sixteen and raging with acne again. One of the show’s most compelling moments comes in a frantic albeit quiet phone conversation between a frightened mother and a counselor. Calling late and expecting to leave a message, mom is relieved to hear a voice. “I just can’t sleep,” she says. “Can you just give me a little hint of how it went?” “I do have the information. We also have a regularly scheduled call [in the morning]” replies the counselor, withholding with the dutiful, infuriating expertise of which only therapists are capable. The struggle this mother faces with her child in the hands of the unknown, frightening wilderness becomes the centerpiece of the play. “I’m sorry I called. I’ll talk to you in the morning.”

(Wilderness plays at Abrons Arts Center, 466 Grand Street, through November 20, 2016. Performances are Wednesdays through Saturdays at 8 and Sundays at 3. Tickets are $35 and are available abronsartscenter.org or by calling 866-811-4111. For more information visit engardearts.org.)