By Qui Nguyen; Directed by May Adrales
Produced by Manhattan Theatre Club, in association with South Coast Repertory 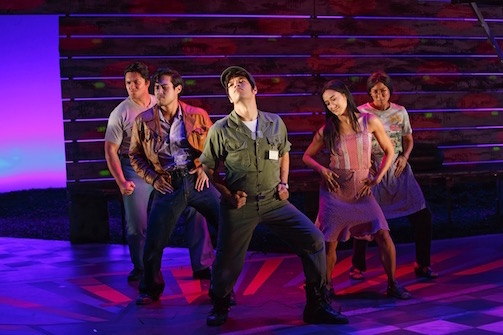 Playwright Qui Nguyen opens his play Vietgone with a character named Qui Nguyen (Paco Tolson) delivering a disclaimer that the following story is not about anyone related to the playwright—especially his parents. What follows is a fictionalized love story of a young couple whose lives converge at a refugee camp after the fall of Saigon in 1975.

Quang (Raymond Lee), an Air Force pilot, flies civilians from Saigon to safety on the USS Midway, only to find that he has no way of getting back to Vietnam; the Air Force has pushed his helicopter off the ship to make way for incoming planes. He and his friend Nhan (Jon Hoche) are sent to a refugee relocation camp in Fort Chaffee, Arkansas to establish a new life. However, Quang is married with two children and desperately wants to return to save the family he was forced to leave behind.

As the duo adjust to their surroundings, finding themselves in new situations from biker road rage to discovering burritos, Quang meets Huong (Samantha Quan), a older woman who was pressed to leave Vietnam at the insistence of her daughter. Initially Quang agrees to find a way to take the aging woman back to Vietnam with him, but when he meets her daughter, Tong (Jennifer Ikeda), there is an instant attraction between them that cannot be ignored. Tong is a strong, independent woman who tries to make the best of her new life in Arkansas, despite the sadness of leaving behind her brother in Vietnam. She and Quang are quick to fall for each other, but their unexpected love affair forces them to reconcile their tragic pasts with an uncertain future.

Although the action is set in the 70's, Nguyen flips the script on many Vietnamese stereotypes and instead has his characters speak in a contemporary hip-hop vernacular, rife with humor, profanity and pop culture references. While not a musical, Vietgone beautifully mixes in rap ballads that advance the emotional arc of both Tong and Quang. The story is moving, the rhymes are natural and poignant, and the characters touch on many real challenges of coping with refugee life.

Director May Adrales has expertly drawn out wonderful performances from this cast. Lee and Ikeda have excellent chemistry, and are supported by the physical comedy prowess of Hoche, Quan and Tolson, who play a myriad of characters. A further testament to Adrales’s clear vision is the creative team she has gathered to bring this production to life. Tim Mackabee’s vibrant Southwest roadside landscape, with dusty billboards and power lines-for-miles, offers an incredible canvas for Justin Townsend’s ambient lights and Jared Mezzocchi’s masterful projection design. Mezzocchi’s skillful use of comic book-style titles, video game graphics for action sequences, and authentic photographs of the Vietnam War is exquisite. Paired with Shane Rettig’s spot-on sound and original music, the visual design elements create many magical moments throughout the production, including a dazzling helicopter take-off onstage.

Vietgone is not shy about calling out historically-held ideologies about race; still, there is a sincere quality about the dialogue that doesn’t fall victim to commentary or sarcasm. There are many layers to this production that are challenging to articulate without destroying the magic of the experience, but the bottom line is this: to see Asian characters represented as conventional protagonists, coping with love and loss, and without any hint of exploitation, is beyond a breath of fresh air. Nguyen has lovingly created a tribute to his family and his heritage, through humor and heart, and without ever stepping foot on the proverbial soap box. Vietgone is definitely not to miss, and highly deserving of many more successful productions in the future.

(Vietgone plays at New York City Center Stage I, 131 West 55th street, through November 27, 2016. The show runs 2 hours 30 mins, with one intermission. Performances are Tuesdays at 7, Wednesdays at 2 and 7, Thursdays and Fridays at 8, Saturdays at 2 and 8, and Sundays at 2. Tickets are $90 and are available at nycitycenter.org. For more information visit manhattantheatreclub.com.)