By Emily Schwend; Directed by Jay Stull
Produced by The Amoralists 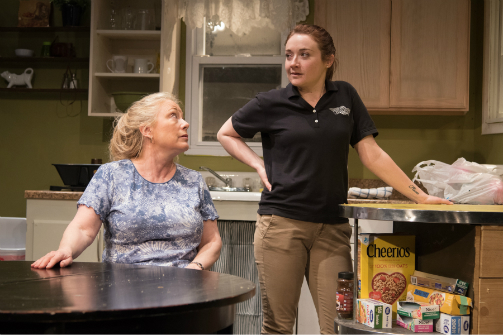 BOTTOM LINE: The strong cast in Emily Schwend's memorable play shows us a few days in the life of a busy mom with no help.

It's Amber (Vanessa Vache) versus the world: this is the life of a struggling Texan mom. With two jobs, three rambunctious kids, an untrustworthy husband, an oblivious mother, an awkward brother-in-law, and a house full of mold and water damage, Amber is getting the wind knocked out of her. Almost down for the count, she is also dealing with her oldest daughter's impending birthday party.

The play's plot is set into motion when Amber's husband Chris (James Kautz) persuades her to get back together with him. At the onset of the play we find out that Amber and her children are sleeping in her mom Laura's (Melissa Hurst) living room, while Chris is staying at his brother Jim's (Alex Grubbs) place. Next thing we know, Chris is attempting to live as a faithful, hardworking husband, although his faithfulness is questionable. Amber and Chris move back into their shabby house, and Jim and Chris get to work fixing the water damage and mold. We see a difficult day ahead for Amber and Chris making little effort to help. When he does, it's inconsistent. Luckily, Jim lends a hand, even zipping up the children's bookbags when no one is watching.

The characters and situations in Utility are fairly recognizable, however the acting is very strong. Grubbs, Hurst, Kautz, and Vache do not disappoint. The commitment is apparent as each actor is truly alive as their character. There are many moments when each person is onstage alone. Whether blowing up balloons, making sandwiches, or cleaning up, the air is wrought with a thrilling tension. Even watching Vache simply smoke a cigarette was enthralling for me. Whether solo or with scene partners, Vache is a star, but she is also served by some wonderful comic relief. Grubbs' mannerisms of understated emotion and shifting intense expressions are unique. Hurst had me in stitches: she sits for almost an entire scene facing the audience, complaining about the incredibly hot day and lack of electricity. She suggests things that need to be done, yet sits there not helping.

Schwend writes in tiny details to help tell the story that shows what a talent she is. Stull adds in his own genius direction to add the same level of care. Each artist involved with Utility further adds to this fantastic cohesion of cast and crew to execute a standout production. This is a show I will be recommending strongly in the coming weeks.

(Utility plays at Rattlestick Playwrights Theater, 224 Waverly Place, through February 20, 2016. The running time is 95 minutes with no intermission. Performances are Wednesdays at 8; Thursdays at 8; Fridays at 8; Saturdays at 8; and Sundays at 3. Tickets are $18 and are available at TheAmoralists.com or by calling 866-811-4111.)

Utility is written by Emily Schwend and directed by Jay Stull. Set Design is by Kate Noll. Lighting Design is by Nicholas Houfek. Sound Design is by Jeanne Travis. Costume Design is by Angela Harner. Stage Manager is Nikki Castle.