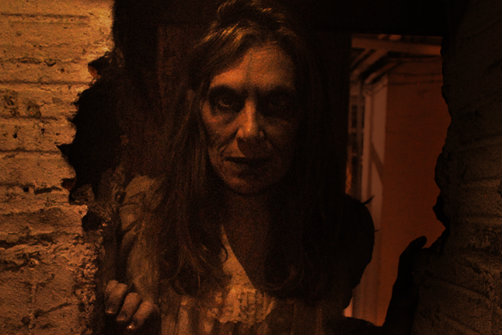 A scene from The Uninvited. Photo by Johanna Hassan.

BOTTOM LINE: A full-contact, immersive haunted house that is light on genuine terror, but shines in set design, mood, and performance from many of the actors.

Adding to the NYC haunted house canon this Halloween season, Dalton M. Dale and Big Dreamer Productions brings you Uninvited: The Awakening. Billed as “NYC’s Largest Immersive Haunted House,” participants traverse the nearly 25,000-square foot labyrinth filled with forty-five actors, stunt performers, and aerial artists who portray various spirits itching to make contact with the living. There is both good and bad to be said about Uninvited, so let’s finish with a good taste in our mouth by starting with the bad.

If you are looking for a wholly individualized haunted house experience, you will be mildly let down (unless you splurge for the "Skeleton Key" VIP experience). The haunt begins with shepherding roughly twenty-five people down a single wide hallway in the cellar of what used to be the Graham Court building. There is an unmistakable feeling of being part of a crowd, which immediately lessens any dread of isolation or being singled out. Granted, actors are dispersed here and there to occasionally scream or grab as you walk by, but you're still another cow in a haunted pasture. Once in the main portion of the underground area, you are free to roam around countless rooms as you please, but at three different occasions everyone is wrangled together for the “main” scenes. While effectively and seamlessly done in other immersive experiences like Sleep No More and Grand Paradise, gathering the group at Uninvited feels forced, awkward, and at times completely irrational.

Having Uninvited be a full-contact endeavor as an audience member is a bit of a two-sided coin. On one hand it creates terror before you even enter. You go into it signing a waiver, acknowledging that the performers can do anything to you (without intentionally causing you harm or doing anything sexually inappropriate). And I’ll admit—the first time I was grabbed, or had a sheet thrown over my head and pulled tight around my neck—the full-contact aspect was a little terrifying. However, it appears that every actor is directed to physically engage with the audience, and, what’s more, to touch with seemingly no reason or motivation. This results in an over-saturation of the "full contact" element in the haunt, which ultimately makes being grabbed or accosted less scary. I got to the point where someone would grab my arm or neck and I would think “Oh, here we go again…”

There are delightfully devious elements to be experienced in Uninvited. The set itself is a major winner. When the backbone of your haunted house is an underground labyrinth with numerous twists and turns, it’s easy to get lost, and creates an innate sense of feeling misplaced and confused. Add in the copious amounts of fog and the combination of dim lighting and strobe effects, and you create a crowd of people pitifully wandering around with their arms outstretched, dreading the chance occurrence of touching something they don’t want to. The small rooms used for rare one-on-one experiences are also very creatively decked-out. I happened upon a classroom, a fortune teller’s room, a room in which the walls were completely covered in playing cards, and my favorite—a room in which one wall is fitted with shelves, on which countless dolls eerily stare at anyone who happens to wander into their domain. But from what I could tell, a lot of the intriguing and more creatively dressed rooms lay vacant my entire visit. I genuinely wished to be engaged by their residents, but was sadly left wandering deserted room after deserted room until being lumped back with the masses.

As with any haunted house, the performances of the actors are crucial. Uninvited crafts itself around the idea that you are trapped among the dead in the land of purgatory, and must find your way back to the living. While the main story ends up being a little cheesy in the delivery of its biggest scenes, the actors do a great job existing in the world they’ve created. At times it’s unclear why some of their characters are in purgatory. For others, it’s very well-defined. My favorite haunt is the keeper of the doll room—a man dressed as a little girl. My guess is that something pedophiliac transpired during his lifetime, which resulted in his roaming those ghastly hallways. Many of the spirits you encounter are oddly curious, wanting to know who you are, what terrible things you’ve done in life, and why you too are in limbo between heaven and hell. It's an effective tool in making you feel part of the world, and possibly damned yourself.

While Uninvited: The Awakening isn’t terribly scary, it has moments of engaging fun that are moderately innovative. If you’re looking for an experience to truly shake you to the core this probably isn’t it, but I would recommend checking it out if you’re looking for something more elaborate than your typical monster-filled haunted house cliché.