By A. R. Gurney; Directed by Stafford Arima 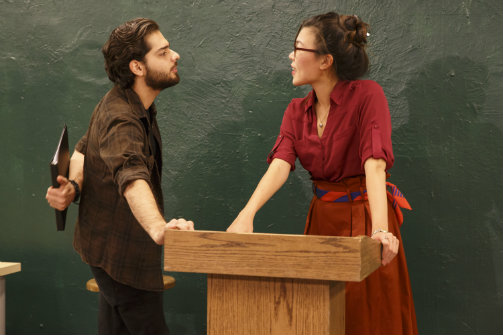 Sometimes, all the right elements come together to make a production that’s just delightful. In Two Class Acts, those include forbidden romances, identity questions, academic debates, and an intriguing blend of classical themes in contemporary contexts. Not to mention the artistic elements that come together here: visceral acting, transporting, detail-oriented design, Stafford Arima’s masterful staging, and A.R. Gurney’s buoyant yet dynamic new plays, all housed at the fearless Flea Theater…What’s not to love?

A. R. Gurney returns to the Flea, having produced eight previous world premieres with the company, to introduce two new works inspired by classic Greek texts and suspicious student/teacher relations. The Flea strongly encourages audiences (and I second the recommendation) to view the two short one-acts in the same afternoon/evening, and audiences can choose to see the two plays in any order (though I quite enjoyed watching the shorter Ajax first, like an aperitif welcoming us into Gurney’s mini-marathon). It is also worth noting, if you are keen on seeing specific actors, that Ajax is performed with a rotating cast of Bats, members of the Flea’s resident non-Equity acting company. (I saw Olivia Jampol and Chris Tabet in Ajax, who were wonderfully electric and fun. They alternate the roles with Rachel Lin and Ben Lorenz, respectively.)

Ajax takes its title from Sophocles’ tragedy about a warrior who takes his own life to end his shame, and whom many scholars say likely suffered from PTSD. It is said to be one of Sophocles’ earliest works, but this play is not included in adjunct professor Meg’s (Jampol/Lin) syllabus for her Greek drama survey course. That is, not until a wise-guy of a new student, Adam (Lorenz/Tabet), picks up her course three class sessions into the semester and insists on writing his own adaptation of Ajax to make up for the work he’s missed. He charms and philosophizes his way into Meg’s good graces, despite being completely disrespectful and overstepping his bounds in his persistent advances towards Meg. As the semester progresses and Adam’s Ajax adaptation finds success beyond the classroom, teacher and student find themselves flirting with danger as professional boundaries blur.

Squash also explores a student romantically pursuing his Classics professor. This time, however, tenure-track professor Dan (played by a dashing Dan Amboyer) is a married man in a 1970s college town (New Haven, perhaps?), and this proposition from a young gay man, Gerald (played with earnestness and a great sense of the period by Rodney Richardson) rocks his sense of identity and his marriage to Becky (a witty portrayal by Nicole Lowrance). In a time when the sexual revolution is still simmering and a more complex view of sexual attraction is just on the horizon, Dan must find his way through this new world through his understanding of the classical Greeks.

One of the things I love most about the Flea is their consistently innovative environmental designs. Despite the constraints of both tiny performance spaces, the two theaters are completely transformed each time I’ve attended plays there. (And I sincerely hope that this spirit of joyous space reinvention will remain true when the Flea moves to its Thomas Street location!) Jason Sherwood lives up to this legacy, and his design, combined with Arima’s engaging staging, results in delightful setups for both plays. In Ajax, the audience is cast as students in Meg’s class, with the majority of the viewers seated at lecture room-style desks with syllabi. In addition to complementing the immersive experience and adding additional layers of humor into the story (for example, we learn from this document that poor Meg has been assigned a basement office next to a janitorial closet), the syllabus also acts as the time piece for the performance, allowing us to follow along with the semester’s progression with each new play Meg introduces to the class. Squash, on the other hand, is staged in a more critically distant setup, but the inclusion of multi-sensory design elements (including fake cigarette smoke for a bar scene) and the close proximity between the performers and the audience (watch your toes, front row!) makes Squash feel just as intensely intimate as Ajax.

Aside from a few telegraphic moments in the dialogue to keep the plot going in these two micro-plays, Gurney’s writing is delightful, and Arima’s staging thrusts the audience into the heat of these scandalous encounters between students and professors. I suspect Sophocles’ spirit is smiling down on the Flea as the downtown New York “agora” comes together over the refreshingly fun Two Class Acts.

The cast of Ajax is Olivia Jampol, Rachel Lin, Ben Lorenz, and Chris Tabet.
The cast of Squash is Dan Amboyer, Nicole Lowrance, and Rodney Richardson.