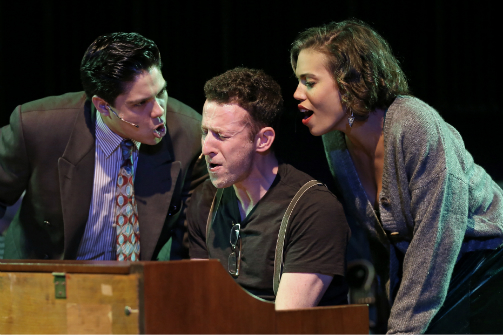 BOTTOM LINE: Tick, Tick…BOOM! is a spectacular and fitting tribute to the late Jonathan Larson.

Given its twenty-year anniversary, there is a lot of Rent nostalgia in the air. As one example, at Feinstein’s/54 Below original cast members Anthony Rapp and Adam Pascal are performing a joint cabaret show reflecting on twenty years of friendship. Everyone knows the story of Rent: four Tony Awards, the Pulitzer Prize, and unprecedented cultural impact and cult following. And along with Rent is the story of Jonathan Larson, the musical’s composer/lyricist/librettist, or more precisely, the story of his death—infamously, the night before the show’s Off Broadway premiere. But Tick, Tick… BOOM! is Larson’s before-story, his autobiography of the few days leading up to his thirtieth birthday in 1990.

Originally performed by Larson as a “rock monologue” that same year, Tick, Tick… BOOM! didn’t make its Off Broadway premiere until 2001 after David Auburn (Proof) revamped it as a three-actor musical starring Raúl Esparza, Jerry Dixon, and Amy Spanger. Its only other New York production was a 2014 Encores! Off-Center production with Lin-Manuel Miranda, Leslie Odom, Jr., and Karen Olivo. So in this very reflective year it’s great comfort that this BOOM! is not a dud, but a spectacular explosion.

Tick, Tick…BOOM! is Larson’s story as he struggles with aging and not being where he wants to be with his career. At 29, Jon is an aspiring composer working on his new musical Superbia, hoping it is his one big break. As he stresses and struggles against the sands of time, he hears a loud tick, tick, tick… and occasionally an even louder BOOM! As Jon says at the start, “The sound you are hearing is not a technical problem. It is not a musical cue. It is not a joke. It is the sound of one man's mounting anxiety. I am that man.”

Directed by Keen Company's artistic director Jonathan Silverstein, this first NYC revival of Tick, Tick…BOOM! feels as low-key as what one might imagine Larson’s rock monologue to be. The set (designed by Steven Kemp) is bare but for a few pieces of moving set furniture and a graffiti-covered ceiling above. And, of course, a piano, which Nick Blaemire, as Jon, plays effectively throughout. Indeed, Blaemire embodies Larson to the fullest, almost at frightening accuracy.

George Salazar plays Michael, a former actor and longtime friend of Jon’s who has traded in the instability for a cushy job in marketing and BMW. Salazar has performed with Blaemire previously, and their preexisting chemistry shows, particularly in “No More,” the duo’s large-and-in-charge number about Michael’s swanky new apartment. Salazar is a force of nature, both as the clearly troubled Michael and the cast of characters he rotates through, including the counter clerk who disapprovingly sells Jon a bagful of Twinkies and Jon’s well-meaning dad.

Ciara Renée plays a stunningly warm yet emphatic Susan, stuck between her support for Jon and her desire to move to Cape Cod and start a family. Blaemire and Renée, too, share an unrivaled connection, flirty and full of love (“Green Green Dress”), but quickly crumbling (“Therapy” and “See Her Smile”). Like Salazar, Renée weaves in and out of the additional characters, such as Jon’s absent agent Rosa Stevens and a market research executive at Michael’s firm who isn’t particularly impressed with Jon’s ideas. (This scene also gives the band a chance to join in a game of word association.) She is at her best, however, as Karessa Johnson, the lead in Jon’s Superbia, as she sings “Come to Your Senses” at his workshop.

Larson’s autobiographical BOOM! is, at its heart, a love letter to musical theatre and, therefore, to Stephen Sondheim, a mentor to Larson and one of his greatest influences, and the man Jon says is “so legendary his name may not be uttered aloud.” For those who aren't Sondheim fanatics, fragments of West Side Story’s “Maria”, “Cool”, and “Tonight” make their way into the show in “Why.” Hints of Sunday in the Park with George's "Lesson #8" can be found in “Johnny Can’t Decide.” But the greatest Sondheim homage occurs when Jon, a waiter at the SoHo Diner, serves a series of unruly customers (expertly played in rapid succession by Salazar and Renée) while launching into "Sunday." Recognition is key and the audience, of course, gets the joke.

But while Larson’s original BOOM! may have been in part a love letter to his idol, this current incarnation, as directed by Silverstein, is a love letter to Larson, and wonderfully so. The lyrics of “Why,” Jon’s heartbreaking 11-o’clock number, are prescient: "With only so much time to spend / Don't wanna waste the time I'm given." Watching Jon find his happy ending is satisfying, but it makes you ache for what could have been: that Larson could’ve gone on to write so much more is a very real tragedy. Twenty years after his death, Tick, Tick…BOOM! is a hopeful and fitting tribute.