By Yvonne Coleman; Directed by Jasmine Taylor
Produced by I Act, You Act! Harlem Theatre and The Freedom Initiative 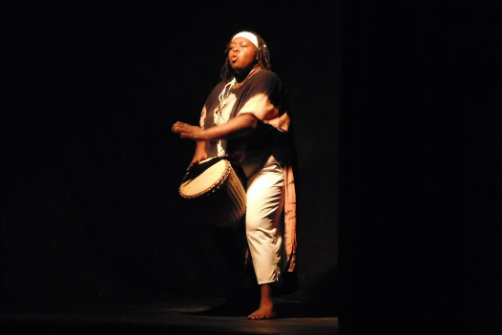 BOTTOM LINE: An ambitious, if still rough, look at the trajectory of African American life from slavery to the present.

Yvonne Coleman says that she wrote Through Times to bring “revolutionary Black history to Harlem.” As a sweeping retrospective of key moments in that history, the play presents a series of scenes linking the survival of Black culture to oppression. From slavery, to Jim Crow segregation, to the birth of the Civil Rights, Black Panther, Black Lives Matter, and anti-carceral movements, the play is both a celebration of human tenacity and a condemnation of racist brutality and the prison industrial complex. There is nothing new here, but the fact that resistance to oppression is not only possible, but imperative, cannot be repeated often enough.

Still, the play is beset by some problems. A series of slides accompanies each of the play’s many vignettes. Some are captioned and others not, and it is not always clear how a particular image relates to the scene on stage. In addition, the audio accompaniment occasionally drowns out the actors’ voices, making it impossible to know what’s happening. Both are easy fixes—lower the music, add captions, and organize the slides so that their relevance is unmistakable.

Other issues, however, will require deeper adjustments. For example, the 19-person cast is a bit unwieldy; the play might work better with fewer people playing multiple roles. That said, while all of the acting is adequate, Benjamin Snipes, as Preacher, is a clear stand-out, offering a powerful depiction of the role religion has played in the community, sometimes serving as balm for aching souls and sometimes pilfering cash from folks desperate for redemption.

Other strengths include on-stage African drumming and traditional dance, performances that emphasize and affirm the importance of cultural continuity. In addition, singer Shanell Joel’s vocals make the Jazz Age come alive and remind the audience about the importance of African American contributions to the entertainment industry. In fact, the play might benefit from several more short musical/poetic interludes.

All told, with a bit of tinkering, Through Times will be an excellent presentation for school assemblies and community events, especially if accompanied by a speaker who can do a follow-up Q&A. Indeed, with better framing, the play could even go one further, serving as a potent introduction to anti-racist organizing in the U.S. of A.

(Through Times plays at I Act, You Act Harlem Theatre, 1975 Madison Avenue at 126th Street, through September 17, 2016. The running time is 1 hour 40 minutes with one intermission. Remaining performances are Friday September 16 at 7:30 and Saturday September 17 at 8:30. Tickets are $20 at the door. If ordered in advance, adult tickets are $15 and children's tickets are $10: email freedominitiative2016@gmail.com.)