Conceived and Directed by Asa Horvitz 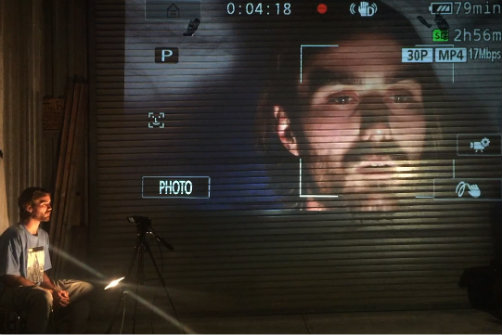 I wonder if those who saw an excerpt of Theban Plays in the Preludes festival this fall walked out with the same major question I did: Is it fair to call Theban Plays a play at all? Perhaps it would better suit the piece (and better prepare its audiences) to call it performance art, or a series of art installations, or a sensory excursion, since the trappings that define a "play" seem buried in other artistic devices. Or perhaps the point is that it defies classification altogether?

There’s no denying that the full version of Theban Plays, now playing at the Brick, fits in one artistic classification: adaptation. The performance event, conceived and directed by Asa Horvitz and created by the cast, draws inspiration from Sophocles' Oedipus Cycle. Ryan Pater, Eliza McKelway, and Deidrea Hamid embody and riff off of Oedipus, Jocasta, and Antigone’s stories, respectively, in three movements. Anecdotes from the performers’ daily lives and dreams blend with the ancient characters' conflicts: Ryan examines others' dreams and violent thoughts to better understand his own mind, just as Oedipus struggles to understand himself. Eliza compares Jocasta’s parting from baby Oedipus to a woman alone in a Planned Parenthood clinic. She then distracts herself and the audience from her troubles with fantasies and artistic endeavors. Deidrea ponders how her violent brother, whom she loves despite the wrath he wrought, found the strength to stand for what he believed in. Then she buries herself in Polyneices' plot of dirt to understand and connect with her brother, and to take a stand for herself. But even though a Theban thread ties these vignettes together, the text deviates from the source material in (seemingly non-sequitur) devised monologues about being millennial creatives in NYC. In this choice, it seems the piece even defies its most obvious classification as an adaptation.

Though Theban Plays may be based on the archetypes of Aristotelian drama, one ought to not come into the event expecting any sort of linear arc, clear climax or cathartic conclusion. Instead, Horvitz maps out a series of experiences that loosely follow the Theban chronology. Some sections of the show feel like sensory experiments: How long can you stand listening to a throbbing drill, which escalates into a battlefield soundscape, as an unmoving Oedipus/Ryan contemplates his tumultuous soul? What happens to an audience and to the individual's senses when we watch the company paint a mural for twenty minutes, without any other story or stakes attached to the task? How will you react when an actor films your face and blows it up on a backdrop for all to see for a long period of time...and how does that personalization affect your relationship to the performance? The piece also brings us aesthetic questions: Can car horns become music? How much of a performance is about an individual audience member’s experience versus strictly a story that performers present onstage? Can a theatrical presentation with loosely structured vignettes and images be a "play?"

The visual elements in the performance complimented the fragmented, aesthetically deconstructed "narrative" presented in the piece. The few set pieces are stark and practical: a folding table, a metal chair, ladders, projection screens, painting equipment. These items signal an unfinished site of creation. Actors drift into the playing space from audience seats, breaking down the traditional performer-spectator experience. Often the house lights would be on in seemingly personal moments to further point to the audience’s connection to the ancient characters’ lives. It’s also interesting to watch the collage of different creative means employed throughout the performance, from such technologically advanced forms as Internet livestreaming to such ancient, low-tech art forms as painting. The various artistic mediums add to the comparison between our day and ancient times, as one contemplates the many ways we’ve created meaning since Sophocles’ was alive.

Theban Plays left me with more questions than conclusions about our contemporary connections to Sophocles, about audience-performer relationships, and about art itself. It’s an interesting piece for audiences with a penchant for avant garde, non-linear works.

Theban Plays is conceived and directed by Asa Horvitz. Music is by Adrian Knight. Additional video by Cassie McQuarter. Web consultation is by Bryan West. Lights and stage management are by Sarah Jane Schostack.

The cast is Deirdrea Hamid, Eliza McKelway, and Ryan Pater.