By Dan Gordon, based on a novel by Larry McMurtry and a screenplay by James L. Brooks; Directed by Michael Parva
Produced by The Directors Company 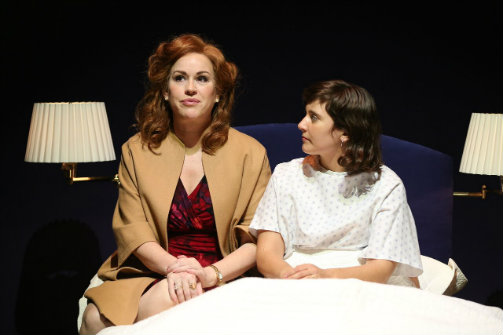 Molly Ringwald and Hannah Dunne in Terms of Endearment. Photo by Carol Rosegg.

BOTTOM LINE: A beautiful adaptation of a movie classic, using a light touch to illuminate the deepest and most important expressions of compassion and human decency.

Dan Gordon’s brilliant rewriting of 1983’s blockbuster film of the same name takes the theater audience through 23-years of mother-daughter conflict and angst. There is not a wasted word or superfluous gesture in this taut, and often funny, production. Molly Ringwald (as widowed mother Aurora) is shrill, narcissistic, and judgmental about everything and everybody, but when it comes to her only child Emma (Hannah Dunne), she is both fiercely protective and relentlessly cruel. Take Emma’s choice of mate, Thomas Horton (Denver Milord), known to friends and family as Flap. “He’s limited,” Aurora snarls in the days before the wedding. “All he wants is a serious teaching job.” Things spiral further downward when Emma announces her first pregnancy.  “Why should I be happy about being a grandmother?” Aurora thunders. ”Who will I ever get now? What man would want a grandmother?”

Yes, it’s a shockingly self-centered worldview. And it gets worse, as Emma’s fecundity leads to three kids in near-record time, a heavy load that forces the stay-at-home mom to simultaneously face the many fractures in her marriage and deal with her mother’s continual disapproval and barely-contained scorn. Throughout, Emma juggles a resigned pragmatism with dreams of something better, alternating thoughts of what is with fantasies of what might be. It’s a bravura performance. Aurora, meanwhile, is presented with tremendous nuance, and Gordon’s script and Michael Parva’s direction give Ringwald ample room to display the torment that lies beneath the surface of her character’s infuriating bluster.

Later, when a terminal illness suddenly strikes the clan, things take a dramatic turn and each member of the family—including Aurora’s sometimes boyfriend Garrett (Jeb Brown)—has to not only face mortality but address what it means to love unconditionally. It’s an intense shift, but commendably the production never descends into the maudlin or mawkish.

In fact, a bevy of jazz standards supplement the dialogue—"Come Fly With Me," "Crazy," "Anything Goes," "I’ll Be Seeing You" among them—to wordlessly convey a host of emotions as the play moves between scenes. In addition, although the sets never change and the characters never visibly age, the seamless dialogue leaves little room for misinterpretation or misunderstanding.

Terms of Endearment is a terrific production, touching every major cradle-to-grave issue, from love, loyalty, and commitment to illness, medical malfeasance, and death. It’s well worth two hours of your time.