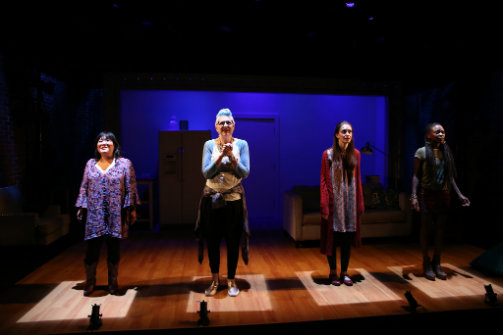 I can’t think of a single woman who wouldn’t relate to Women’s Project Theater’s latest play Stuffed. Fat, skinny, curvy, big-boned, athletic, anorexic, saggy, apple-shaped, pear-shaped, bulimic, rail-thin, chubby, young, old, or perfect—no body is spared in Lampanelli’s delectable new comedy. Playing herself, Lampanelli finds a way to comically poke fun at the insecurities within all of us, while getting to the root of our anxieties about weight and body image.

What's interesting about this show is that there is neither a plot nor distinct relationships between the four characters; rather, each of them represents varying degrees of self-esteem and body acceptance. The setting is a fashionably chic living room and kitchen, staged by set designer Antje Ellermann; the costumes by Jessica Ford are casual and modern; the time and place is unknown. We don’t even know whose home it is or why these four women are getting together. The ambiguity of the who, when and where is a smart move in that it makes the four women all the more relatable and recognizable to our own lives. They are some of the most authentic and accessible characters I’ve ever seen.

Lisa (Lisa Lampanelli) is tired of being the “fat girl,” Katey (Zainab Jah) is that “skinny bitch” who everyone loves to hates because she “just can’t gain weight,” Britney (Jessica Luck) is a bulimic and anorexic who will be forever fighting body dysmorphia, and Stacey (Ann Harada) is a one-in-a-million anomaly who has come to love the way she looks. We get to know each of the women as they share heart-wrenching moments from their past that have shaped their perceptions of their own bodies: jealous mothers, break-ups, lovers with diabetes, and family expectations. All of the performers are remarkably witty and sincere. Jah gives a standout monologue, disclosing the only time she ever felt womanly was during pregnancy because she finally was round and shapely.

While the darker moments are effectively virtuous, truth rings throughout the play from start to finish—especially in the comedic parts. Where other works about body image have rightfully gone down the boo-hoo path, Stuffed doesn’t give you time to wallow. The subject matter is inherently serious, of course, but Lampanelli’s interspersed stand-up lightens up the tone at just the right moments, and there are group pieces that will have you LOL-ing all night—my favorite being the women’s reactions and the ridiculous excuses they spew when stepping onto the scale. From “My underwear are heavier this time” to “This thing must be broken,” I’m sure I’ve heard myself and my friends say them all!

The structure of the show keeps the pace quick and light-hearted, allowing the sensitive material to be digestible. Lampanelli and director Jackson Gay took a risk with this one, tiptoeing on the fine line of offensive and bullying, but it was a risk worth taking and one that produced a downright riot. Ladies, don’t miss the chance to laugh at the women of Stuffed… and at yourselves.

Stuffed is by Lisa Lampanelli, with additional material by Ashley Austin Morris. Directed by Jackson Gay. Set Design is by Antje Ellermann. Costume Design is by Jessica Ford.  Lighting Design is by Yael Lubetzky. Sound Design is by Elisheba Ittoop. Hair and Make-up Design is by Rob Harmon. Properties Master is Theresa Pierce. Stage Manager is Danny Maly.