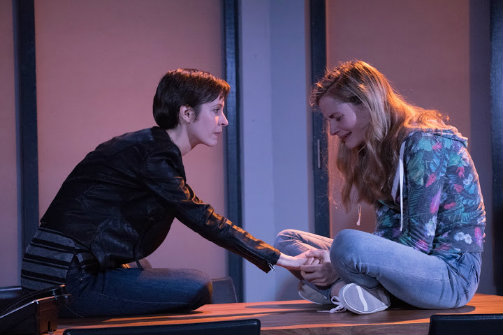 BOTTOM LINE: Based on true events surrounding a retracted Rolling Stone article on a gang rape at the University of Virginia, Stet offers a moving examination of the growing problem of rape on college campuses and rape culture as a whole.

With the media attention given to the Stanford rape case, and the perpetrator’s much-criticized shortened sentence, the issue of rape on college campuses has once again returned to forefront of the public’s mind, making the issues and themes explored in Kim Davies’ new work Stet especially timely. The play focuses on Erika (Jocelyn Kuritsky), a journalist who is writing an expose on the problem of rape on college campuses and how poorly it is dealt with. The story was inspired by the real life events surrounding the Rolling Stone article entitled “A Rape on Campus” in which a female student detailed being gang raped at a frat party at the University of Virginia, only to have the magazine later retract the story due to issues with the credibility of the account given. While some might see this story as blow back to the attention given to the issue and to the trust given to the victims of rape who are brave enough to come forward and tell this story, the play frames what might be a lie based on a nugget of truth (as is implied in the play), as one girl’s attempt to bring attention to a growing problem that she fears no one is paying attention to.

Erika is a journalist at an unnamed magazine who prides herself on avoiding what she deems to be “women’s interest stories,” instead going after unfeminine subjects like doping in professional baseball. Her editor Phil (Bruce McKenzie) pushes her into covering a story on the growing problem of rape on college campuses, a story she accepts only after much protesting. Erika sets out reviewing footage of student involvement in the Take Back the Night movement and contacts a student named Ashley (Lexi Lapp) who was taped describing how being a victim of rape destroyed her life. Ashley calls Erika back and shares a story of being gang raped at a college frat party as part of a hazing ritual. Erika is astounded when Ashley tells her that the school refused to investigate the incident so she meets with the school’s coordinator for sexual assault and response, Christina (Déa Julien). Christina, barely out of college herself, reveals that students are not necessarily encouraged to report sexual assault or file police reports. She says most of them would never want this because, “A lot of them just want to feel okay. They don’t want the drama of the whole—of a disciplinary hearing, of a police report—that’s a lot. They just want to move on.” She reveals that none of the women she has spoken to about being victims of sexual assault ever bothered to press charges against their rapists and she doesn’t push the women to press charges due to the fact that the women who do so rarely find justice and will have their names raked through the mud as they are forced to relive the circumstances of their rape all over again.

As Erika’s investigation goes on, she and Phil examine their personal connections to the story. Phil reveals his experience in a fraternity where girls were given Everclear instead of vodka so they would become more drunk and be more likely to have sex. Erika, meanwhile, breaks down as she reveals that she herself was raped by a classmate in graduate school. Working on this story has taken a toll on her and caused her to excavate long buried painful memories. When Erika asks Christina for another account of campus rape for her article she breaks down her false facade of PR ready peppiness and reveals that she herself was raped as a freshman at the college. Through Erika and Christina’s revelations we see just how prevalent a problem sexual assault is and how it affects women’s lives even outside of the confines of college campuses and fraternities.

Stet succeeds in tackling an emotional and controversial issue in a nuanced manner. Kim Davies’ script turns the case into an enthralling story that held my attention from start to finish. Even if most of the audience knows the truth about Ashley’s story (due to the real life events it is based on), the turns leading up to the truth are compelling nonetheless. The production’s use of multimedia, including news footage, gives a glimpse into how the media shapes our view of rape cases and the culture that creates these situations.

Each cast member gives believability to their character’s emotional turns. Jack Fellows is particularly engaging as a naïve frat boy who does work to encourage the importance of sexual consent, but who, at the same time, reveals that his attitude towards women adds to the problem. This production successfully tackles a difficult social issue of grave importance without becoming overly preachy and didactic or creating maudlin characters. Rather, Stet gives light to a growing problem encouraging room for discussion and solutions.

(Stet plays at June Havoc Theatre, 312 West 36th Street, through July 3, 2016. The running time is one hour and forty minutes with no intermission. Performances are Tuesdays, Wednesdays, and Thursdays at 7; Fridays and Saturdays at 8; and Sundays at 2. Tickets are $50 and are available at abingdontheatre.org or by calling 866-811-4111. A portion of the proceeds from each ticket will benefit Take Back the Night. For more information visit abingdontheatre.org.)

Stet is by Kim Davies. Directed by Tony Speciale. Set Design is by Jo Winiarski. Lighting Design is by Daisy Long. Sound Design is by Christian Frederickson. Stage Manager is Deidre Works.