Off Off Broadway, Multi-Disciplinary Opera
Ran through 7.2.16
HERE, 145 Avenue of the Americas 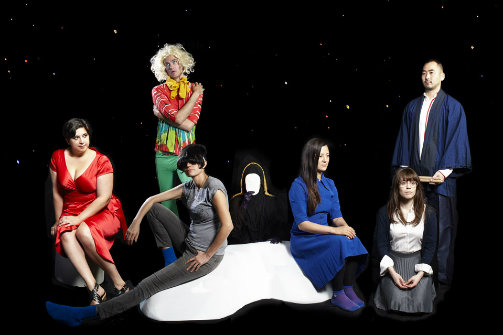 BOTTOM LINE: Song is a multi-disciplinary performance art piece on finding meaning (or not) in this mortal life.

To watch and enjoy a performance like Song, check all of your preconceived notions of theatrical storytelling at the door. Song’s ensemble begins the opera lying catatonic across the stage floor, and then they share in reciting Rene Daumal’s poem, “Last letter to his wife,” to explain that they “lack desire” and find life hopeless and/or futile. From the start, the audience learns that this is not an opera driven by “drama” (which can only exist when there are conflicting desires between a character and an opposing force), but that something in the universe (the force of life and death itself?) propels the characters forward, whether they are ready for their ultimate fate or not.

Audiences who enjoy an aesthetic reminiscent of Julie Taymor’s Across the Universe, but who are also comfortable not having an overarching narrative arc to follow, will likely enjoy Song. The whole experience is like a series of short dreams: We see fragments of seven characters’ lives presented in pockets in time, with characters bleeding in and out of each others’ stories, and conscious rational logic does not apply to the structure of this world.

It seems that nothing in this world is meant to make logical “sense.” For example, the ensemble even captions the opening scene as, “May 1943,” but then plunges into a scene and song that looks like it came right out of a late '60s/early '70s rock concert. With this disjointed logic between what I was seeing and what I heard the cast tell me to see, it occurred to me midway through watching the piece that the visual storytelling provided more of a narrative anchor than the text. In fact, I found some of the most grounding moments (and some of the most stunning visual/aural displays) were during transitions rather than the scenes themselves. These moments presented an ethereal light show (beautifully designed by Ayumu Poe Saegusa) against a mellow musical interlude, with colors seeming to swirl around the onstage moon and the spherical paper lamps above the audience banks. Suddenly we, the viewers, were connected to this orbital movement, as the light show seemed to say, “And the planets keep spinning…” as we move into another story elsewhere in the universe.

Despite the lack of an overarching narrative to ground the opera’s seven disparate characters, the performers demonstrated great skill in their respective specialized crafts. Musical accompaniment from Ava Mendoza on guitar, Kaoru Watanabe on taiko drum and woodblocks, and author Leyna Marika Papach on violin and synth provided varied textures in the opera’s nebulous world (ranging from gritty rock to soothing ethereal to traditional Japanese percussion). Papach’s curation of other worldly movement vocabularies made the world of the opera feel distant while its themes felt familiar. Of particular note, Chikako Bando’s movement sequences were absolutely spellbinding, and in fact depicted the clearest narrative of the seven performers’ throughlines, even when she spoke no English text for the entire evening.

Song describes itself in its tagline as “a poem, a pocket of time, a wish, a lie, a piece of you, a fragment of me.” With this resistance towards defining itself, the piece’s meaning remains as elusive as its form. In certain segments, this ambiguity beautifully depicts moments of uncertainty in grappling with one’s own mortality and purpose in life. While these are important existential questions to explore, I can’t help but wonder if a ninety-minute theatrical work is the best format for these questions.

(Song played at HERE, 145 Avenue of the Americas, June 29 through July 2, 2016. The show ran 90 minutes without an intermission. Tickets were $18 and were available at here.org. For more information visit wearesong.com.)