Off Off Broadway, Play
Extended through 3.6.16
Dixon Place, 116A Chrystie Street 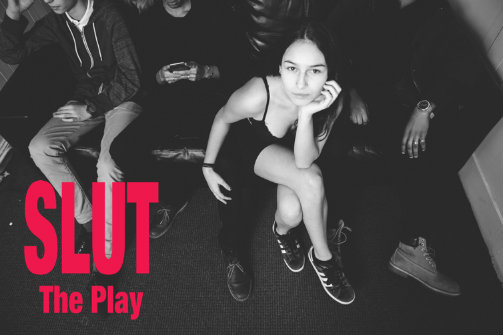 BOTTOM LINE: Slut: The Play is an authentic look at what it means to be a teenage girl today, and one that teenagers and adults could learn something from.

Anybody who has been called a slut or called somebody else a slut will get something out of Slut: The Play. Everyone in our society has been affected by rape culture in one way or another. The members of The Arts Effect are trying to do something about it.

The Arts Effect is a youth arts and activism program founded by Katie Cappiello and Meg McInerney, the directors of this production. Cappiello began developing Slut: The Play in 2012—through discussions and improvisation with the all-girl theater company.

The finished play, which debuted at the New York International Fringe Festival and has been performed across the country and internationally, begins after a high school dance team practice. The girls dance around provocatively and talk about hooking up at a party later that night, referring to themselves as the slut squad. It's hard not to judge their behavior. If they were older, we might say they are owning their sexuality and reclaiming the word slut in a positive way. But they're just kids. So when one of the girls, Joey (Lexa Krebs), finds herself the victim of sexual assault, we have to confront our earlier judgments, especially as she has to deal with people thinking that she asked for it.

The dialogue is realistic and fair to all the characters—those who support her and those who turn against her. Because the show is performed by teenagers (all giving impressive performances), it not only makes it more believable, but harder to watch. When you see actual girls talking about these things, you can see them happening to your siblings, daughters, relatives, and it makes it all the more upsetting.

A play probably can't fix everything that's wrong with our society, but at least it starts a dialogue. There is a talkback after each performance. It's important for young women to see this play, but I also hope that young men will see it and be part of the conversation. The Arts Effect now has a male troupe and the play Now We Are Men, developed in the same way as Slut, was performed before Slut over the weekend and will be performed again on Tuesday. I unfortunately didn't get to see it, but my guess is it will be back for a longer run. Slut: The Play appears to be sold out for the remainder of the run, but there is a waitlist at the door.

(Slut: The Play plays at Dixon Place, 116A Chrystie Street, through March 6, 2016. The running time is 60 minutes with no intermission, followed by a 25 minute talkback. Performances are Thursdays at 7 and Saturdays at 2. Tickets are $15 for middle and high school students, $20 for college students, $30 for general admission, and $40 for VIP seating and are available at dixonplace.org or by calling 866-811-4111. For more information visit stopslut.org.)