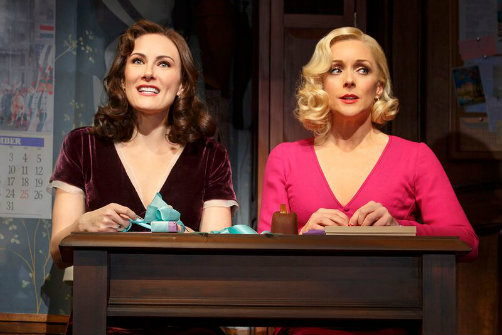 Laura Benanti and Jane Krakowski in Roundabout Theatre’s She Loves Me. Photo by Joan Marcus.

BOTTOM LINE: A delicious revival of a 1960s gem, She Loves Me is quintessential musical theatre bliss.

For those unfamiliar with She Loves Me, the anodyne title might seem to signify a bland tale of heterosexual love, presumably indistinguishable from every other musical from the so-called “Golden Age” of the mid-twentieth century. And while yes, the basic plot of this 1963 musical might seem horribly old-fashioned in an age where Fun Home and (soon) Hamilton take home Best Musical Tony Awards, the pleasures of She Loves Me are such that even the most jaded cynic may well leave walking on air.

If you’ve seen the films You’ve Got Mail, The Shop Around the Corner, or In the Good Ol’ Summertime, you’ll be familiar with the plot, since all are based on the same source material as She Loves Me – Miklós László’s 1937 play Parfumerie. Maraczek’s Parfumerie is an upscale shop in 1934 Budapest (David Rockwell’s elaborate, dollhouse-like set deserves a Tony nod), where assistant manager Georg (Zachary Levi) takes an almost instant dislike to Amalia (Laura Benanti) after she goes over his head to talk her way into a job. As summer turns to autumn and then winter, Georg and Amalia’s growing antipathy is tempered only by their deepening feelings toward their treasured anonymous pen pals. And to anyone who has ever seen a romantic comedy, it should come as no surprise that as much as Georg and Amalia claim to hate each other in person, on paper they are each other’s “Dear Friend” and thus very much in love – they just don’t know it yet.

Like any self-respecting Golden Age show, the B-plots of She Loves Me are as fun as the main one, all eventually culminating in a resolution that is as satisfying as it is unsurprising. Shop owner Mr. Maraczek (Byron Jennings) is increasingly suspicious that his wife of many years is cheating on him. Teenage delivery boy Arpad (Nicholas Barasch) hungers for a promotion. Two more employees, Ilona (Jane Krakowski) and Kodaly (Gavin Creel), are in the midst of a not-so-secret affair that soon turns sour. And as tension grows in the shop, the observant Sipos (Michael McGrath) offers Georg both a kind ear and pragmatic advice.

As well-constructed as Joe Masteroff’s book is, the big draw to She Loves Me is Bock and Harnick’s score, which (to my ears) is even more enjoyable than that of 1964’s Fiddler on the Roof, also seeing a revival this Broadway season. If director Scott Ellis doesn’t quite bring out the wordplay in Harnick’s clever lyrics, as in the early “Sounds While Selling,” the cast more than makes up for this as the show progresses. Everyone gets a chance to shine – Gavin Creel manages to be both skeevy and sexy in his bravura “Ilona,” Michael McGrath shows Sipos’ underlying strength in “Perspective,” and Nicholas Barasch bursts forth with adolescent excitement in “Try Me.” Even better is Jane Krakowski who, as the supposedly brainless Ilona, finds surprising depth and hilarity in even the smallest beat: watching Krakowski’s foot lift each time she plants a kiss, or hearing her sound out the word “optometrist” in “A Trip to the Library,” somehow never gets tiring. And most crucially, Benanti and Levi make for an ideal leading couple – Benanti’s nuanced, intelligent Amalia is clearly the perfect match for Levi’s charming yet down-to-earth Georg. While New York theatregoers might expect Benanti to shine, given her previous Broadway successes, Levi, best-known for the TV series Chuck, is her equal in every way. “Vanilla Ice Cream” and “She Loves Me,” their back-to-back solos in Act Two, are alone worth the ticket price, and hands down the two biggest highlights in an evening full of them.

Sure, I have some qualms with Roundabout’s production. Why, in 2016, are there no people of color in the cast? (Because let’s be clear – She Loves Me has as much to do with 1934 Hungary as does Hamilton). Especially given their all-white Noises Off earlier this season, Roundabout needs to take a serious look at its casting politics. And She Loves Me loses its way a bit near the end of Act 1 with “A Romantic Atmosphere,” when chaos ensues at the cozy restaurant where Amalia is set to finally meet her pen pal. In this somewhat random number Ellis and choreographer Warren Carlyle play up the vulgarity and mine anything they can for a joke; the result is a lengthy and tiring sequence that strays from the main characters and feels all the more unnecessary given how good the rest of the show is. Still, the otherwise exquisite She Loves Me makes a compelling case for the value of a high-quality musical rom-com; whether you take your parents, your grandparents, your lover, friend, or just yourself, She Loves Me is must-see theater.