Off Off Broadway, Play
Runs through 12.17.16
Studio at Cherry Lane Theatre, 38 Commerce Street 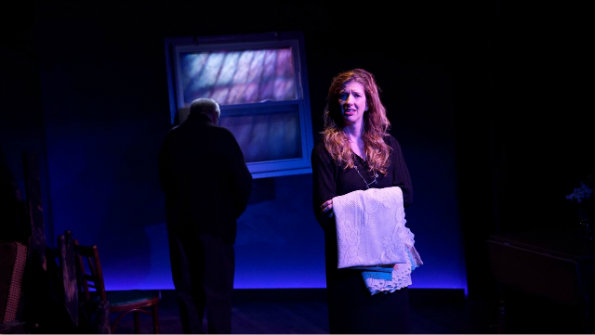 BOTTOM LINE:  A play that explores the long-term physical and mental consequences of war.

Two generations of American veterans are featured in Shades, a piece that explores the physical and mental toll that war takes on soldiers. At the center of the play is Val (Ashley Wren Collins), a nurse whose husband and brother both served in Vietnam. Her husband has recently died, and her brother, Don (Carson Lee), suffers from a lung affliction we suspect might be cancer. As Val copes with the loss of her husband, she focuses all of her energy on taking care of others. Besides her brother and her father, Jerry (Hal Robinson), a WWII vet, she also attends to June (Holly Walker), another soldier who served in Vietnam and became a quadriplegic in the line of duty.

Haunted by her husband's death, and troubled by the fact that everyone she loves suffers from the aftermath of war, Val sets out to understand the gruesome reality that the vets saw in action. While trying to convince her brother to seek medical attention, she encourages everyone around her to talk at length about their experiences so that she can fully understand the trauma that may have ultimately claimed the life of her husband.

If you’re somehow uninformed about the fact that war exposes people to unspeakable atrocities, Shades will give you a personal account of what soldiers go through. Playwright Paula J. Caplan has had an extensive career as an academic and one gets the sense that the testimonies that she offers here are based on primary research. The horror is real, and the resilience of the human spirit is quite moving.

Unfortunately, the play lacks action. The majority of the experience entails listening to the characters’ war stories. While this is informative and sometimes moving, I found myself confused about what these characters were trying to accomplish. I didn’t know whom to root for or why. Shades feels less like a play and more like a chance to pick the brains of veterans over a cup of coffee.

Under the direction of Alex Keegan, some of the performances are quite successful. Hal Robinson stands out as the good-natured World War II hero, and it was a thrill to see Holly Walker, from the now-canceled Nightly Show with Larry Wilmore, on a New York City stage. If you’ve got a veteran in your life that you struggle to understand, Shades may be worth your while.

(Shades plays in The Studio at the Cherry Lane Theatre, 38 Commerce Street, through December 17, 2016. The running time is two hours and ten minutes with an intermission. Performances are Tuesdays, Thursdays, Fridays, and Saturdays at 7;  Sundays at 2 and 7. Tickets are $39 (for half price, use code HALFSHADES) and are available at cherrylanetheatre.org.)